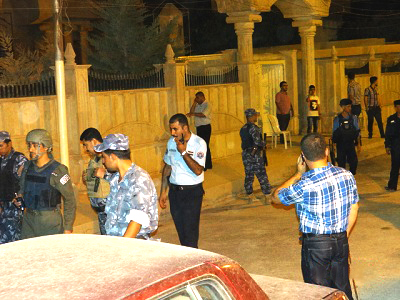 Kirkuk, Iraq -- At least 150 young people, joined by other faithful, spent today in prayer and fasting to overcome violence, after a bomb exploded in front of the Chaldean cathedral.

On Sunday, September 16 (see photo), a bomb hidden in a bag exploded at 20.45 at the door of the Cathedral of Kirkuk, while Benedict XVI concluded his visit to Lebanon. The Chaldean archbishop, Msgr. Louis Sako, was in Beirut to receive from the pope’s hands the apostolic exhortation Ecclesia in Medio Oriente. The Pope’s visit to Lebanon coincided with widespread tension in the Islamic world, resulting from an anti-Islam film, deemed blasphemous against Muhammad.

The explosion in front of the Chaldean cathedral caused only material damage. Since September 21 was appointed an International Day of Peace, a group of young people launched day of fasting on Saturday, a holiday in Iraq, asking for peace in the city of Kirkuk and across the country. The day also had moments of prayer. Speaking to young people, the archbishop said the Church in Iraq, is according to the word’s of St Paul: „… afflicted, but not crushed“ (2 Cor 4:8). And he praised the idea of combining prayer and fasting, according to the teaching of the Gospel, in which Jesus says that some demons „can not be driven out except by prayer and fasting“ (cf. Matthew 17:20). The 150 young people, together with other believers ended the day by participating in the Eucharist together.

Chronic: Church Bombings in Iraq Since 2004