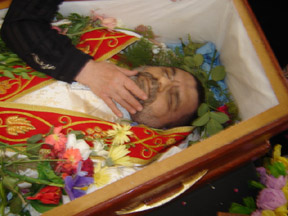 Youssef Adel, a priest with Saint Peter’s Church, was killed by gunmen travelling in a car around noon (0900 GMT), they said.

A medical official said Adel’s body had been brought to Ibn Nafis hospital in central Baghdad.

Christians in Iraq have come under frequent attack in recent months, with clerics kidnapped and churches bombed.

Last month, the body of Paulos Faraj Rahho, Chaldean Catholic archbishop of Mosul, was found in a shallow grave in the northern city two weeks after he was kidnapped.

Rahho, 65, was abducted during a shootout in which three of his companions were killed, as he returned home after mass in Mosul on February 29.

He was the latest in a long line of Chaldean clerics to be abducted since the US-led invasion of 2003.

Iraq’s Christians, with the Chaldean rite the largest community, were said to number as many as 800,000 before the US-led invasion nearly five years ago. The number today is believed to have dropped to half that figure.

In January, Pope Benedict XVI expressed his „spiritual closeness“ to Christian victims of attacks in Iraq.

„Mindful that such attacks are also directed against the whole people of Iraq, His Holiness appeals to the perpetrators to renounce the ways of violence, which have caused so much suffering to the civilian population,“ the pope said.