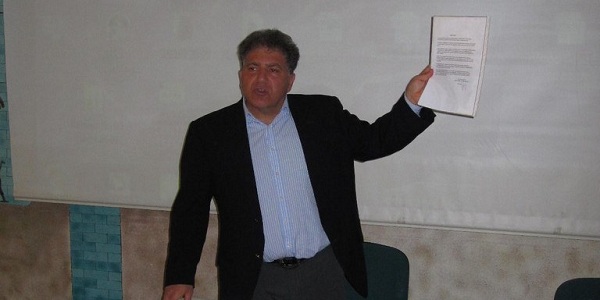 I am an Assyrian! I am an Assyrian who lives in Sweden and have relatives and friends living in many other countries, as refugees, desperately missing their hometowns and villages.

I am an Assyrian who seeks strength from a piece of stone smuggled out from his lost hometown and kept as the most precious item in his home.

I am an Assyrian who has come here to tell you about the Assyrians who, along with Armenians, were subjected to a genocide in 1915 within the Ottoman Empire by the Ottoman state.

Assyrians once lived in their hundreds of thousands in the cities, towns and villages which are geographically located in the east and south-east regions of today’s Turkey.

Then came the 1914- 1915 genocide which targeted Armenians and Assyrians.

Over half of all Assyrians were exterminated in the genocide. Most of them were killed by swords. Yes, swords! Or SEYFO, as Assyrians say. I would like you to keep the word SEYFO in your mind. It is a word which has meant for Assyrians since 1915 more than just what it literally means. For us it means blood, it means death, it means pain felt deep in the heart, it means a homeland which is no longer home.

The elderly Assyrians who witnessed the Assyrian genocide still remember a saying they heard from some of those who got involved in carrying out the genocide: ‘Red or white, an onion is an onion; it has got to be chopped up.’. Meaning; a Christian is a Christian, whether Armenian or Assyrian: he has got to be killed.

It is clear from Ottoman documents that 1915 deportations and massacres were not only directed against Armenians. The general plan was to homogenise Turkey by getting rid of the non-Muslim peoples, which in the end resulted in 2 million Armenians, Assyrians and Greeks being deported from their homelands or massacred.

“Seyfo”, the Assyrian genocide, is still fresh in the minds of Assyrian people as we are still being adversely effected by its consequences. As a result of SEYFO, we have lost our homes, and are scattered all over the world as a result of which we are now in danger of loosing our national identity.

We, Assyrians, have gone through a very traumatic experience. SEYFO opened in the souls of Assyrians deep and painful wounds which are waiting to be treated. We lost more than half of our population. It is now the time for humanity to hear and do something about it. International recognition would not take away the pain deeply rooted in our souls but would help us feel that we are a part of the humanity which could not go to the rescue of our grandparents.

We are still hurting but what we are after is not hate or revenge. What we want is recognition and reconciliation

The Assyrian genocide has yet to be recognised by Turkey and the International community. We have been waiting for 93 years now. In 93 years the world has turned from a group of individual countries, where atrocities of any size or nature were often seen as matters concerning the countries they took place, into a global community. We are fast becoming a worldwide nation of humanity. The 6 billion strong nation is not only soon going to take over the future but the past as well. The past genocides is a matter for all peoples now. The 1915 genocide is no longer a matter for the perpetrators and the victims. It is far too big a matter for only them to deal with.

I am most happy that so far about twenty countries have officially recognised the 1915 Armenian Genocide. I hope Britain and other countries will follow suit. As a representative of Assyrians I am asking for justice for my people too. Remember: Assyrians were subjected to the 1915 genocides too. We also demand that today Britain and tomorrow the whole world officially recognise this fact.

There were Assyrians living in Van, Bitlis, Urfa, Hakkari, Diyarbekir, Salamas, Urmiya provinces. Today, in all those provinces you would hardly see an Assyrian person. Could Turkish authorities tell us the truth as to where have they all gone? So far they have failed provide a credible account.

But we all know that some of them were deported; children left behind were forcefully converted to Islam; and some others were simply killed. And yet Turkey is still denying that in 1915 this genocide was carried out by the government and the state agencies of the time.

Turkey does not want ‘1915 incidents’ to be a political issue but a subject for discussion for historians. The 1915 genocide has become an issue for Turkey only after various countries started to recognise it. It is now time for Britain as well to recognise the 1915 Assyrian, Armenian and Greek genocide. Britain was one of the witnesses to the Armenian-Assyrian genocide. She cannot and must not close her eyes to the facts just because she thinks recognising it would adversely effect her economic and political relationship with Turkey. The sooner Turkey recognises the 1915 genocide the better. Better for Turkey, better for the Armenians and Assyrians.

Today I call upon Turkey to free itself from its taboos and recognise that in 1915, during the Ottoman Empire, hundreds of thousands of Armenians, Assyrians and Greeks were killed in a genocide planned, organised and carried out by the government of the time.

I wonder when will a Turkish Prime Minister apologize to the victims of 1915 Genocide?,

I wonder when will a Turkish Prime Minister learn the genocide victims’ languages and apologize to them in their languages?

I wonder when will a Turkish Prime Minister realize that the best way to build a future together, is recognition.