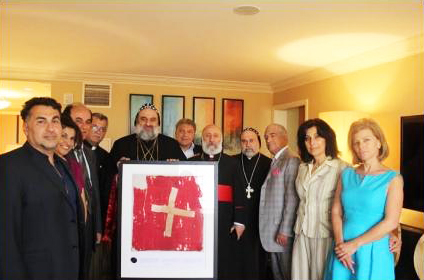 Los Angeles (AINA) - A delegation of Assyrian organizations and churches met on Sunday with His Holiness Ignatius Aphrem II, Patriarch of the Syriac Orthodox Church of Antioch.

Representatives from Assyrian Aid Society (AAS), Seyfo Center, Assyrian Democratic Movement (ADM), Assyrian Universal Alliance (AUA), American Mesopotamian Organization (AMO), along with Father Athanasis Toma of Mar Shaleeta Parish of the Ancient Church of the East met with His Holiness Mor Ignatius in Costa Mesa, where he was staying during the youth conference of the Syriac Orthodox Church. Also present at the meeting were His Eminence Mor Clemis Eugen Kaplan, Metropolitan and Patriarchal Vicar of the Western USA Archdiocese and His Eminence Mor Dionysius Jean Kawak Archbishop and Patriarchal Office Director.

The delegation congratulated His Holiness on his recent election as the Patriarch of the Syriac Orthodox Church and discussed the importance of dialogue between Assyrian national churches and the need for unity during these turbulent times that Assyrians are facing in their ancestral homelands (Iraq and Syria). His Holiness expressed high hopes for close cooperation between churches and indicated his desire for achieving full communion. His Holiness also stressed Assyrians are one nation with multiple national names, similar customs and traditions and one language with two dialects. Metropolitan Clemis Kaplan stated „not only are we one nation, but we are one blood.“

His Holiness also expressed the need for all Assyrian organizations and national churches to come together to raise awareness throughout the world about the Turkish Genocide of Assyrians in World War one — called Seyfo (sword) in Assyrian — which claimed 750,000 Assyrian lives. He went on to state that next year will be the 100th anniversary of the Genocide and it is extremely important that 2015 be designated as the „Year of Seyfo.“

The delegation thanked His Holiness for the meeting and presented him with a replica of the Assyrian flag that was raised by the Assyrian General Petros DeBaz during WWI, along with recordings from the Mesopotamian Night concerts from previous years.