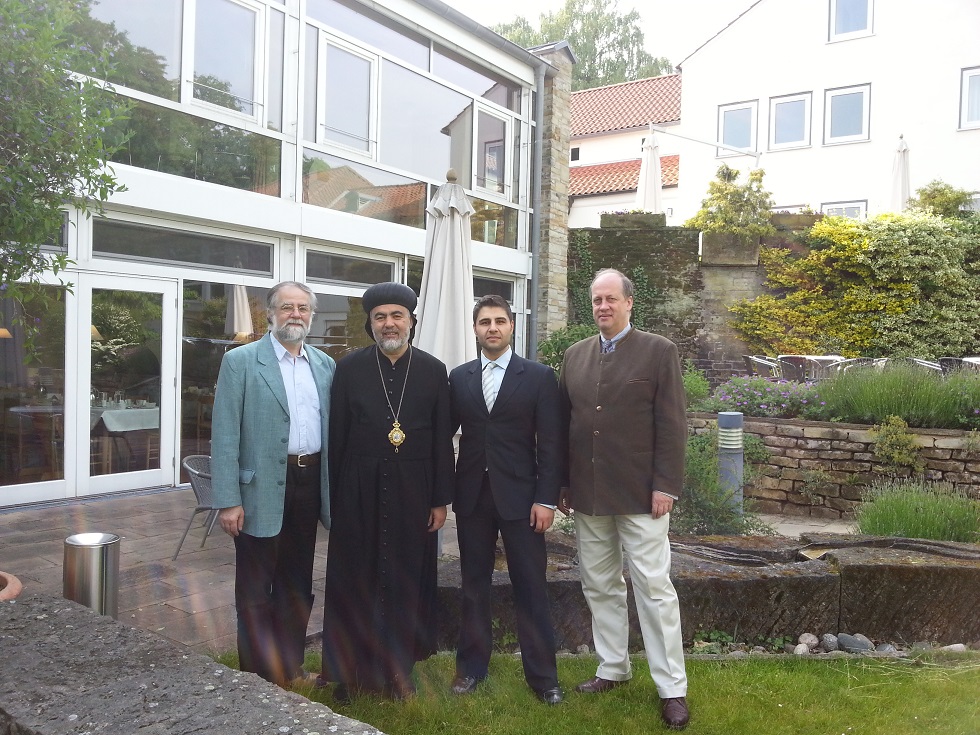 To our spiritual sons: the esteemed priests; the Church council and institutions; and the noble Syriac people of the Archdiocese of Jazirah and Euphrates, Syria. May God protect you.

Blessings, love and prayers for you all, as we ask God for your wellbeing, safety and stability.

We had wished to write to you earlier, however, due to the long-term severance of the means of international communication in the Governorate of Hassake, and for want of anyone to bear this letter of ours to you, we were not able to send any written communication. Now we thank God for the presence of a few of our people in the city of Vienna, whom we have given this letter to carry to you on their return to the homeland.

However, in spite of the loss of communication with the Governorate of Hassake, we have spared no effort in reaching out to our people in the border areas who are partners with us in charitable work and human aid, by means of Turkish signal coverage, in order to ask of all of you, and especially the poor.

It is imperative in this letter that we make you aware of our ardent desire for upholding the historical relationship between us and all our neighbours in the Syrian Jazirah, and of our insistence on the avoidance of alignment to any party whatsoever and under any circumstances; and our incisive opposition to the enmity of the neighbours who have lived with us for many centuries in the lands of our fathers and grandfathers, and with whom we have united through the care of the poor and the displaced, both Christians and Muslims; and our defence of the rights of the people of the Jazirah to the benefits of the country and especially of the land on which they live; as well as our sincere stance with the victims of kidnapping and their families through the great protest of unity, which went out from the Archdiocesan headquarters in Hassake to the courthouse on the 25th January 2013. This brought together for the first time in the history of the Governorate all sections of the community of the Jazirah in order take a clear stand against the evil of the kidnappers, and to demand of those in authority to fulfil their duties to protect the citizens, since it is within the capability of these authorities, through the monitoring of telephone conversations, to find out who is behind the systematic kidnapping, whose short-term aim is extortion, and whose long-term aim is to cause the people evacuate their homeland.

All these positions we took did not please certain people because they wanted to embroil the Christians in the current struggle, as happened with certain members of the Armenian Church in Aleppo, the results of which were harmful to them everywhere and especially on the public highways.

Therefore the Church in the Jazirah has suffered greatly from action and aggression originating from a certain party, which has led some of our people astray; they do not know the nature of the Church, and thus how the Church in her mission differs from the now widespread parties, organisations and associations of various names.

The Church, by her fundamental nature, calls for peace and forgiveness and the rejection of violence. She also calls for the condemnation of the wickedness which we see widespread in the corruption of the structure of the state, and in society, and especially destructive practices like the effectual absence of functioning institutions, nepotism and moral decline; matters which His Excellency President Bashar al-Assad referred to in one of his speeches regarding the crisis in Syria.

Just as the Church as a whole suffered, so did our councils because of the lack of alignment to whichever party, and we have suffered personally from many who misunderstood our spiritual address on 6th November 2011 in St Mary’s Monastery in Tel Wardiat, when we offered up prayers for Syria, and spoke on the subject of the justice which leads to peace.

As for the evening of Saturday, 17th November 2012, when a young Christian girl in Hassake went away by night of her own free will with a young male convert to Christianity in Lebanon, a certain party exploited this issue wanting to raise up sectarian strife, and incited some reckless young men to bring out weapons, blunt instruments and a cattle prod in St George’s Cathedral Church in Hassake whilst we were explaining that the girl had not been kidnapped, but had made her own decision to go away with that young male Christian convert. The matter became clearer after a few days as that young girl got married to that young Christian convert in Istanbul according to Christian rites.

These severe crises have come upon us and we have kept our patience, asking God for relief for the country and the faithful. However, the last act alien to the moral comportment of the Syriac people came on the morning of Wednesday the 27th March 2013 when one of our people broke into our place of residence in Hassake, incited by a certain party, holding a gun to our face and a grenade in order that we should secure the release of his kidnapped brother and nephew. And in spite the fact that we condemn kidnapping and kidnappers and we did not know their identity, we tried to put to use our social relations with all our fellow citizens in case there would be found someone who could release the captives. We were held hostage for five hours until some good men of the Church and the community came forward in order to persuade him that they would be able to secure the release of his brother and nephew. Following this, granting him a request, we went personally to Qamishly, where we presented a written letter to the office of Suroyo TV appealing to all those of good-will to release the captives.

One by one after all these incidents which the people suffered, and we suffered with them, it became clear that a certain party wanted to foment strife between us and our neighbours, just as it wishes to foment internal strife amongst the Syriac people. It wants to embroil our people by putting them at odds with the Church and her leaders and workers; rather, it will stop short of no act to empty the Church in order to make her people leave our country of origin. So it embroils our people in acts alien to our Christianity and to our Syriac identity and then acts as if it is innocent, and it seems that no-one is aware what this party is doing in secret.

The great trials which we have suffered have not and will not stop because of our non-alignment to any party; rather there is in place a plan to target us directly.

Therefore, and so that the poor especially, and the people in general, do not lose us, and in order to clear the Syriac people of internal strife, we esteemed that the situation required the guarantee of aid to our poor from abroad, just as we had been orchestrating from inside the country, as well as the defence of our historical presence as Syriac people. As the original inhabitants of the country they ought to receive their rights, as the international conventions dictate, in order that they should not one day become extinct, having been absorbed into the other nations.

The matter of the Syriac people, in regards to their historic rights, is the same as the other peoples who are struggling to realise nationalistic gains in the country. If Syria now lies partly in the Levant, and partly in Mesopotamia, then the Syriac people are the original inhabitants, who have lived in both parts over thousands of years, and their name and the name of Syria will be united over the generations.

The development of the assassination and the kidnapping of religious leaders has become widespread in these days; and there is no-one who hears the word of truth, which would prevent them from perpetrating grave wrong-doing. This is what has happened in the case of the kidnapping of their Graces our brother the Metropolitan Mor Gregorious Yohanna Ibrahim and our brother the Metropolitan Boulos Yaziji. These events have caused us to consider deeply what is happening inside the country. For we have not one day been lacking in our defence of the rights of our people. The history of the Jazirah bears testimony to us that we have daily come to the defence of the oppressed, both Christian and non-Christian.

We mention here but examples of certain actions of ours, and so that the new generation should be aware of us. For which of you does not recall our defence of the murdered Suliman Ghazala, from the Syrian Catholic Church, when he was assassinated in Dirbasiyya at the beginning of the year 1993?

Rather have you forgotten the risk we took, exposing ourselves to open gunfire in Ras al-Ayn in order to broker peace between the Kurds and the Arab tribes there following the events of the Qamilshly stadium on 12th March 2004?

Or have you forgotten our role in putting out the fire of strife in Malkiyyah when some of our people murdered the now deceased young man Jawan, when through the kind efforts of our friend Mr Abdul Hamid Darwish the charges were dropped from our people for the sake of the continual Kurdish-Christian relations of brotherhood in Malkiyyah and elsewhere in the cities of the Jazirah.

We were never far from the pains of the people of the Jazirah, however the escalation of events and deterioration of circumstances has compelled us to live in neighbouring countries and to communicate with you from abroad in order to meet the needs of the poor, and to defend the dignity of the Syriac people and their rights everywhere. This has taken place with the blessing of His Holiness the Patriarch.

Now it is necessary for a word directed to you all, that you should take pride in your christianity, and not forget that you are Syriac before every else, that you are the original inhabitants of Syria, and that you have special rights according to international law, which protect the indigenous peoples of the country in order that they should not become extinct.

If your neighbours in the region, be they Kurds or Arabs, take pride in their national identity so you too should take pride in your language and your history and your Syriac national identity, and work together with all parties as ‘Syriac’ people in order to safeguard your historic rights in the land. For if you do not preserve your Syriac identity, you shall not be able to preserve even what you inherited from your Syriac Christian tradition either.

This is what was necessary for us to write to you now, and we ask God to take you by the hand and lead you into the realisation of goodness and peace, and into a bright future for the Syriac people, and for all Syrians.

The grace of the Lord be with you all.