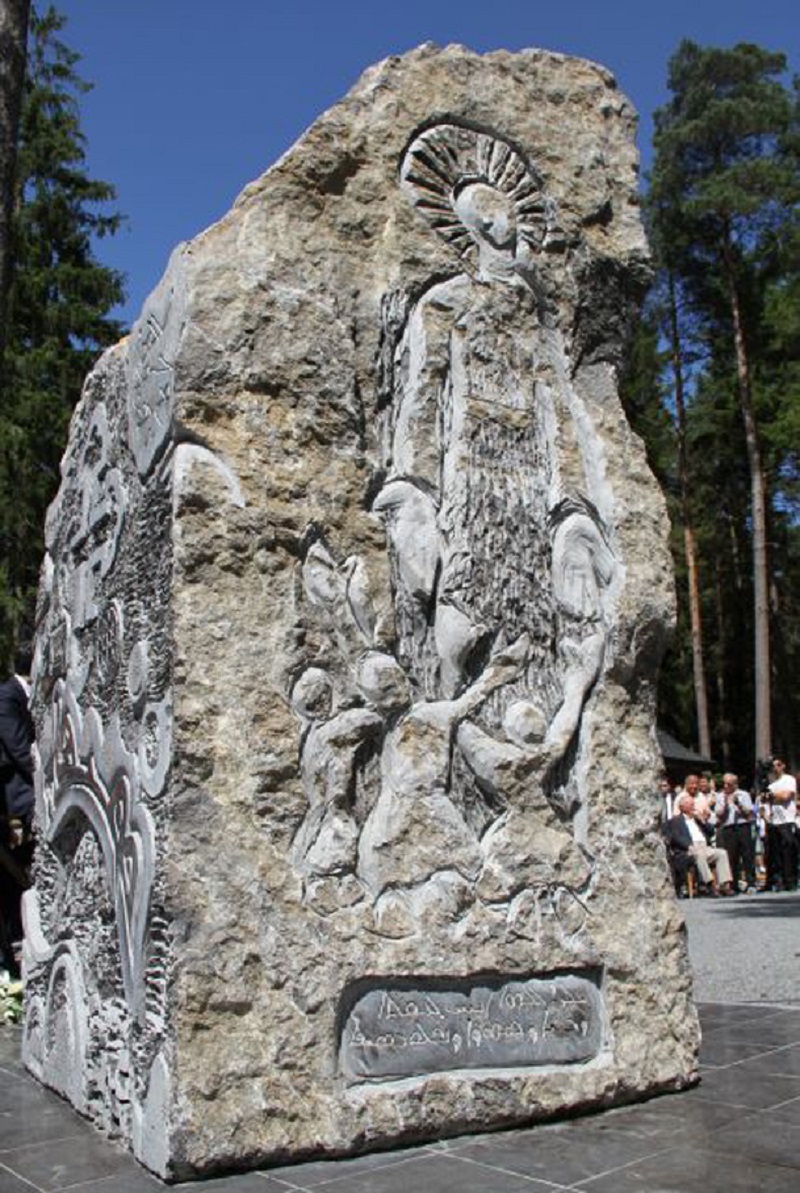 Bannaux, Belgium (AINA) -- On August 4, 2013 hundreds of Assyrians (also known as Chaldeans and Syriacs) and their friends from all over Europe gathered at the site of the Bannaux Sanctuary in the municipality of Sprimont/Belgium. At the heart of Europe people came together to unveil a monument commemorating the Assyrian victims of the genocide of 1915 perpetrated by the former Ottoman State (AINA 8-5-2013).

With the 100th anniversary of the Turkish genocide of Assyrians, Armenians and Greeks approaching, this latest genocide monument is the seventh Assyrian monument to be erected since 2000. Assyrian genocide monuments have been erected in Australia, America, Armenia, Wales and France. A monument is planned for Sweden. 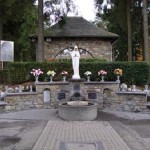 The location of the Bannaux Sanctuary, now holding an additional attraction, could not be more appropriate. In the winter of the year 1933, the mother of God appeared to an 11 year old girl called Mariette. Since then the place holds a shrine and has emerged as one of the most popular Catholic pilgrimage sites in Europe known as „Our Lady of Bannaux.“

Bannaux is a small hamlet just southeast of Liège and 50 miles east of Brussels in French-speaking Belgium. The Shrine of the Virgin of the Poor includes the ‚Sacred Spring‘, the Chapel of the Apparitions, a large church, several small chapels throughout the forest, the Stations of the Cross, a hospital for the sick who come for healing and a pilgrim’s information office.

The monument was erected thanks to the effort and diligence of the leading members of the Syriaque-Institute of Belgium, which also represents the Assyrian Genocide Research Center. Belgium is the second country, after France, in Europe where an Assyrian Genocide monument has been erected in a public space.

The famous Assyrian artist Moushé Malke carved the monument from a granite block weighing 12 tons. The artist used mythical images from the Assyrian pre-Christian and Christian eras, thus reminding of the killing of hunderds of thousands of Assyrians during World War I by the former Ottoman government. The Turkish Republic, as successor of the Ottoman state, until this very day denies the genocide and any wrongdoing. At the same time it is increasing its political efforts to undermine the efforts of Assyrians, Armenians and Pontic Greeks for the recognition of the mass killings of the Christian population during the World War I — a crime against humanity that has been well documented and accepted by the international genocide scholars (AINA 12-15-2007). The Swedish Parliament (The Riksdagen) was the latest European country, which on March 11, 2010 adopted a resolution recognizing the World War I killings of Armenians, Assyrians and Pontic Greeks by the Ottomans as a genocide (AINA 3-12-2010). 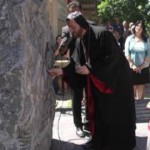 The ceremony started at 2pm at the Sacred Spring and was led by dignitaries and a childrens‘ choir chanting church songs. After the crowd of hundreds of people arrived at the site of the monument, people took seats in a glade surrounded by trees; the almost two and half meter high stone was positioned between two trees and veiled with black satin, tied with a red bow. The unvealing ceremony began after a short welcome by the moderators of the day, Abud Gabriel and Shamiram Ayaz. Mouché Malké, the artist, abbot Leo Palm, principal of Banneux, Benoit Drèze, Belgian Federal Parliament Deputy and Melke Gabriel, a son of a survivor of the genocide, jointly pulled down the black satin veil, giving full sight to the monument. The unveiling was accompanied by the cheers and shouts of joy from the audience. The blessing ceremony of the monument was conducted by H.E. Polycarpus Augin Aydin, Archbishop of the Syriac Orthodox Church, and followed by prayers and chants attended by Bishop Aloys Jousten, Bishop of Liège, abbot Leo Palm and many other church representatives of the Syriac Catholic Church, the Syriac Maronite Church, the United Protestant Church of Belgium, the Assyrian Church of the East and the Russian Orthodox Church of Liège. 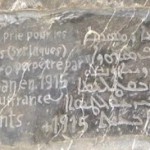 The text engraved in two languages (French and Syriac) on the monument reads:

Virgin of the Poor, pray for Assyrian (Syriac) Martyrs of Seyfo genocide perpetrated by the Ottoman Empire in 1915 and relieve the suffering of their children.

In his short speech, Fatrus Gabriel from the Syriac Institute of Belgium said that „this is a monument for peace. The artist has carved a dove into the stone as symbol of peace to commemorate our martyrs. As you have seen, we also let two white doves fly to symbolize peace, therefore hoping for their resurrection. We do not blame the Turks as a people for the genocide. We have many friends among them who are also present today. We hope that this monument contributes to the process of recognition of the Assyrian Genocide. Although the pain has been passed down from generation to generation, it may heal slowly so that peace is restored between the people concerned.“

In his speech, Sabri Atman, the director of the Assyrian Genocide Research Center, made a call on the leaders of the Turkish state to stop their denial policy. He stressed that „the Republic of Turkey was built upon the systematic ethnic cleansing of Assyrians, Armenians and Pontic Greeks in 1915. The Ottoman Empire is responsible for the physical annihilation of 1.5 million Armenians, 750,000 Assyrians and 500,000 Pontic Greeks.“ He mentioned that similar monuments have already been erected in Australia, France and Armenia and a next one is due in Athens. But a time will come, when „Mardin, Hakkari, Van and Istanbul will host such stumbling stones,“ he added. Atman also criticized the efforts of the Turkish Embassy in Brussels, which sent threatening letters to Assyrian clerics and associations denying that such a thing as the genocide happened in 1915 and demanding not to join the event. Similar letters were apparently sent to Belgian officials.

Melchior Wathelet, State Minister for Energy and Mobility, Dominique Drion, Belgian Provincial Minister of Education, sent messages of solidarity, stating that „Assyrians, as one of the oldest people in the Middle-East, have been victims of many genocides. The Turkish state needs to confront this injustice.“ The Prime Minister was represented by Marie-Dominique Simonet, former Minister of Education of the Federation Wallonie-Bruxelles, and Michel de Lamotte, MP of the Walloon region, both expressing their support for the Assyrian community of Belgium and the need for recognition of the genocide by the Belgian State. The MP Benoit Dreze endorsed the proposal in the presence of Mr. Emmanuel Radoux, President of CPAS (Centres Publics d’Action Sociale) and magistrate of Social Affairs of the community of Sprimont. The mayor of Sprimont was represented by Emanuel Padoux, emphasizing the importance of such a monument and expressing joy to host it.

In a surprise appearance, Zalgai Aho appeared and delivered a message of sympathy. She is the daughter of the Assyrian poet and national activist Ninos Aho, who passed away on July 15, 2013 in San Pedro, USA. Ninos Aho, who was in recent years a messenger for the recognition of the genocide, was supposed to be present at this unveiling event Bannaux. Zalgai Aho expressed gratitude for the organizers and particularly the artist for carving the title of a famous poem of her beloved father on the monument, which reads „A Grain of Wheat.“

Furthermore, the official ceremony was enriched by the presence and messages delivered by several delegates of Assyrian political and civil organizations from Germany, the Netherlands, Belgium, Sweden, Poland, Switzerland, France, the U.S., and Australia. To mention are delegations from Assyrian national organizations in Europe (among them the Assyrian Democratic Organization, the Assyrian Democratic Movement, the Assyrian Universal Alliance and the European Syriac Union) and Assyrian Federations from Sweden, the Netherlands and Germany. Moreover, clerics from various churches as well as Armenian, Greek, Kurdish and Turkish guests attended and delivered messages of solidarity at the ceremony. All speakers repeated the appeal to the Turkish government to face its tragic history and requested recognition and apology for the crimes committed against its Christian population in 1915.

According to the invitation (see below) the event was sponsored by more than a dozen Assyrian organizations, including the Inanna Foundation and the Yoken-bar-Yoken Foundation. 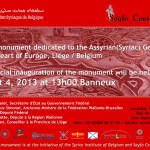 The ceremony ended with acknowledgements of the organizers to all those participating as well as all those excused (among them Archbishop Philoxenus Mattias Nayis), which sent their solidarity messages in writing supporting the recognition of the Assyrian genocide.

Abdulmesih BarAbraham holds an Msc. from the University of Erlangen/Nuernberg. He has published numerous articles on the situation of the Assyrians in the Middle East. In an international human rights tribunal in 1987 judging on the minority issues in Turkey, he represented Assyrian organizations and presented the Assyrian Genocide to the public. The tribunal was led by the Society for Endangered People. Currently he is Chairman of the board of trustees of the Yoken-bar-Yoken Foundation and Board member of the Mor Afrem Foundation.

Miryam Abraham is a Bachelor student in Governance and Public Policy at the University of Passau.