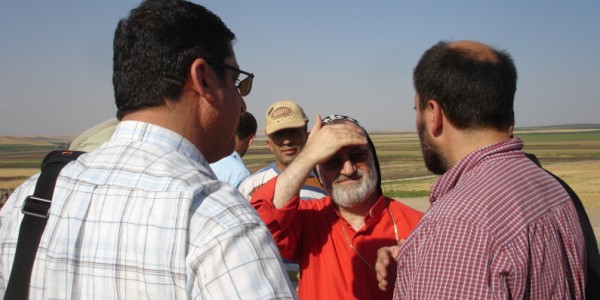 Diyarbakir, Turkey (AINA) -- The 4th of August 2009 was not an ordinary day for the archaeological team working at Ziyaret Tepe nor for his grace bishop Saliba Ozman, the Assyrian bishop of Mardin. The team of excavators had just unearthed a small tablet when they learned that the secretary of Bishop Ozman had called and expressed his wish of visiting the historical site of Ziyaret Tepe. This site corresponds to the ancient Assyrian city of Tushan and is now manifest as a high mound surrounded by a lower town. Tushan served as an imperial provincial capital in the Neo-Assyrian period.

The international team of archaeologists has been excavating at Ziyaret Tepe, which is located near the modern village of Tepe (about 60 KM east of Diyarbakir), for the last twelve years, and the excavation has yielded a number of interesting finds that enrich our understanding of ancient Assyrian civilization, including a high status residence with an elaborate pebbled stoned mosaic, a temple treasury of the goddess Ishtar and a palace of the Assyrian governor. The temple yielded an archive of cuneiform tablets recently published by Prof. Simo Parpola in the State of Assyria Archive Bulletin, while the palace contained monumental door sockets and beautiful painted wall plaster.

The bishop was entertained for tea at the excavation house and then driven to the ancient mount to witness the rare opportunity of removing a newly found cuneiform tablet which was found in situ amidst an ashy layer of a flooring surface. The bishop was elated with joy and said: „I thank you for this rare opportunity and I thank this international team of archaeologist for shedding a gleam of light on our ancient civilization, and I cordially invite you to visit our monastery in Mardin so that you are acquainted with the modern Assyrians and their culture and not just their ancient past. Our monastery was founded on an ancient Assyrian temple of Shamash whose remains still survive and we would love to give you a tour of our monastery.“

Whilst on the mound the bishop was given a full tour of the site and shown a map of the region where nearly forty Neo-Assyrian sites have been identified, a number of which are currently being excavated. Surprised to see the mountain ranges of Tur Abdin from the high mound the bishop was then mesmerized to learn that his ancient predecessors had a road connecting the Assyrian core capitals with Tushan through a passage that crossed through Medyat and Savor (Assyrian Sawro) to Tushan.

The director of excavation Dr. Timothy Matney informed the bishop that: „the archaeological team of Ziyaret Tepe seems to have a special connection with the Assyrian people. Beyond the shear love we all hold for the ancient and rich past of your people we are also proud to let you know that to date we have had three archaeologist of Assyrian background that have joined our team: in 2005 we had Juliana Garis, in 2007 we had Helen Malko, and in 2008 and this year we have Nineb Lamassu.“ 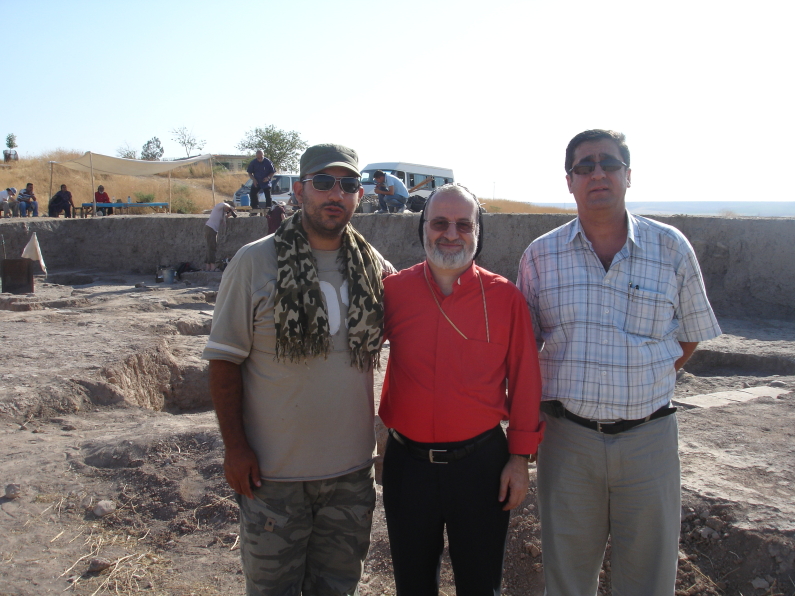 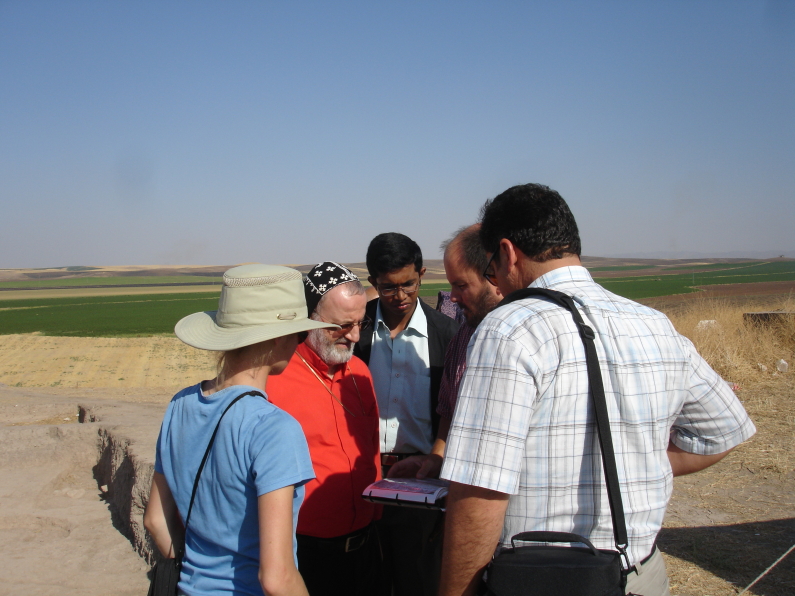 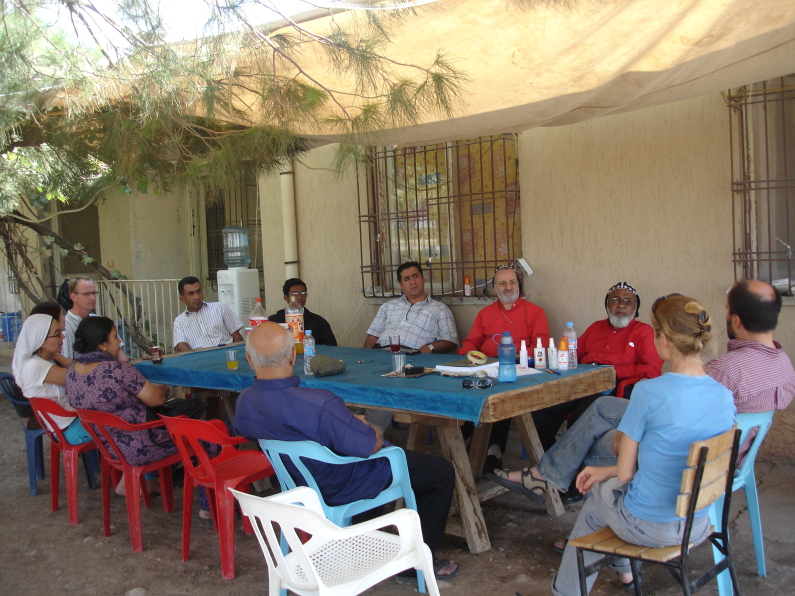 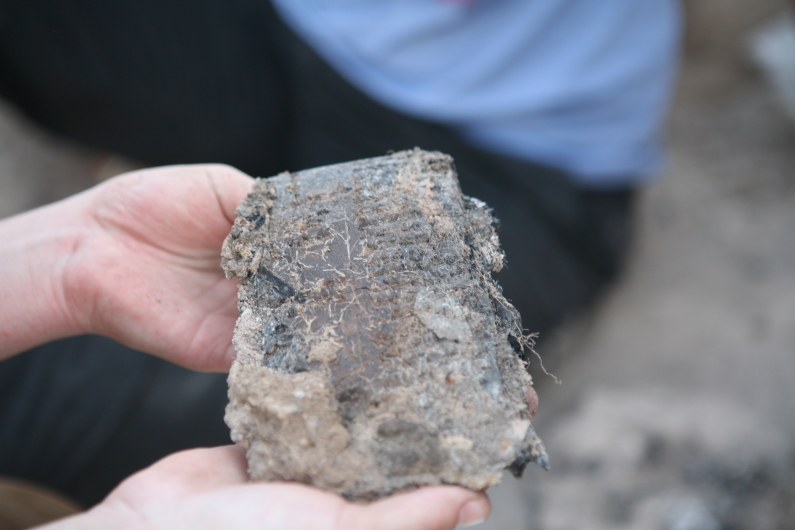 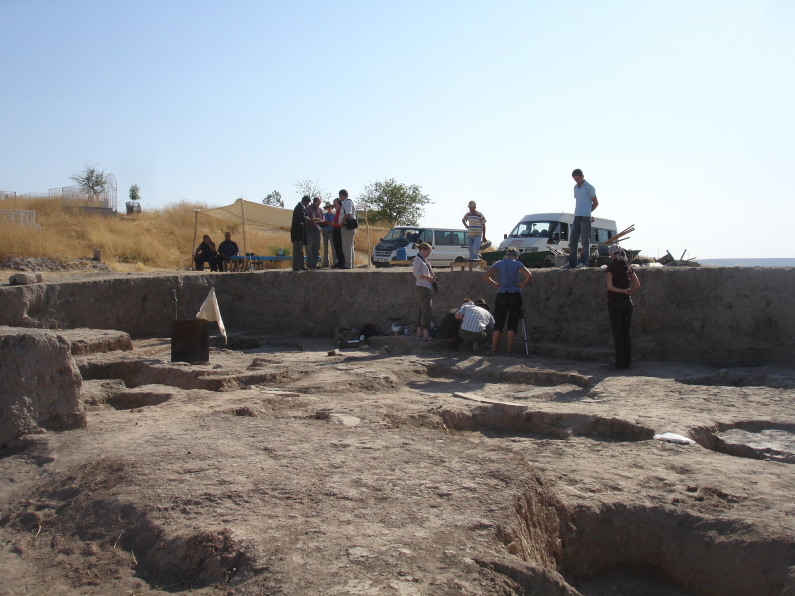