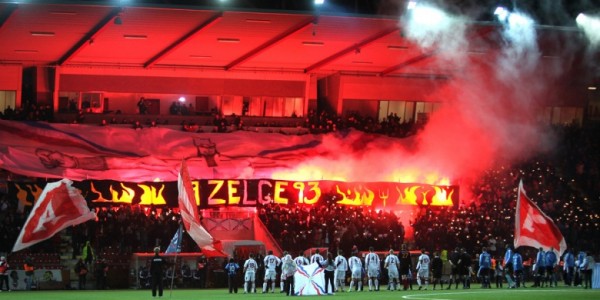 KRÖNIKA We have the honor to present Broula Adde, Assyriska supporter and guest writer directly from New York, United States. Broula describes her love for Assyriska and the team as a symbol and an inducer of the Assyrian identity. Without revealing too much, we recommend readers to revel in this wonderful text.

An ancient African Proverb states that „It takes a village to raise a child“ meaning that raising a child is a communal effort. The responsibilities lie not only with the parents, but also with the extended family and sometimes the community.

Let’s take it a step further and say „It takes a team to raise a nation“, specifically, Assyriska. For thousands of years Assyrians have not been able to claim a homeland. As scattered and dispersed as we are around the globe, we have yet to officially belong to a nation. However, over the past three decades Assyriska has created such a phenomenon all across the world with an unbelievable perspective of nationalism forming a fellowship amongst Assyrians, building brand awareness, and maintaining an incredible fan base.

Thanks to Assyriska so many Assyrians globally have been able to share joy and excitement while cheering for their „representatives.“ Assyriska signifies the solidarity that joins our people hand-in-hand. I am not from the birthplace of Assyriska (Sweden) but it does not mean that I do not share a connection with my team. I may not be able to watch a match or even get a chance to read about the progress of my team however, my fellow Assyrian friend(s) will make sure that I get the proper „nutritional“ team facts.

Assyriska gives families an opportunity to spend quality time together during a live match or while gathered at home watching it on TV. Close friends convene at the local clubs and honorably root for their national team. You will never come to know a fellow Assyrian who doesn’t know the significance of Assyriska and because of that the comradeship will continue to grow.

Do you own a piece of Assyriska? I can wager that every single fan has a collection of Assyriska brand name items. I definitely do! Whether it’s a T-shirt, sweatshirt, jacket, jersey, scarf, umbrella, key chain, flag, hat etc; they all scream ASSYRISKA! What better way is there to market a powerful team then through walking advertisement?

This incredible team has created brand awareness to open the eyes of potential fans and quite truthfully, to prove to their fans that they are (as we say in USA) on top of their game. In addition to the many tangible things that make it possible for Assyriska; the website, www.assyriska.se plays a major role in branding the success of this team. This website was created for the sole purpose of communicating to the fans and keeping them up-to-date about the developments of the team.

For now the majority of it is in Swedish, but with the help of translating it to English by their web team, we Americans or other English readers, will be able to follow it too! So, if you don’t own a piece of Assyriska or if you already do and want to add to your collection; now is a good time to visit the website’s souvenir shop.Would you believe me if I told you Assyriska represents the entire Assyrian population throughout the world?

Of course you would believe me! Over the last 30 years Assyriska’s fan base spread worldwide in over 80 countries. The fan population continues to grow due to internet and media sources in spreading team information and streaming live matches. It has stretched outside of Europe to other Assyrian populated areas such as Chicago, California and Toronto. Although there is much political disagreement of national identity, the common denominator seems to be Assyriska.

A true fan has compassion for this sport and is loyal to his team regardless of any outside setbacks. Assyriska maintains its fan base through their fellowship, marketing and most importantly their devotion to their supporters. There is no reason not to support this team, after all, they’ve climbed the ladder of success as a national team, are the stars in a film documentary called Assyriska: A National Team Without A Nation by Nuri Kino and Erik Sandberg and who knows what else lies ahead for Assyriska, but I hear something calling and it sounds like victory!

It’s our duty, not just as soccer lovers but as ASSYRIAN soccer lovers to support this team without a nation. David B. Perley, a philosopher and nationalist, explains it best by saying, „I am an Assyrian, and as an Assyrian I am obligated to be actively interested in the destiny of the Assyrians, once the greatest nation now almost forgotten.

I would be an arch-criminal if I failed to assume this obligation.“ Assyriska is the destiny for the Assyrian nation and it takes a team to raise a nation…to rise again.