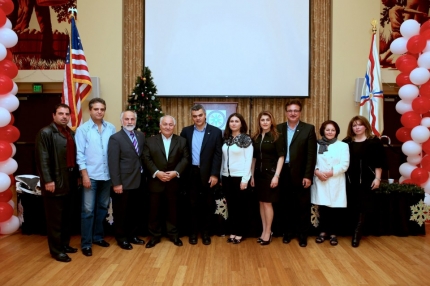 Seyfo Centre USA hosted a series of educational lectures in Los Angeles, San Diego, Turlock and San Jose on the Assyrian / Armenian Genocide and Seyfo in 1915. The lectures were organized with the help of local Assyrian American organizations, and given by the British-Armenian historian, Ara Sarafian (Gomidas Institute, London).

The Assyrian American Association of San Jose in collaboration with Seyfo center hosted this event on Sunday Dec 9th, 2012 at the Almaden Community Center.

At this event, Mr. Sarafian started his talks by stating that around 3,000 Armenian and Assyrian communities were destroyed in Ottoman Turkey between 1915-18. These communities had their own schools, churches and community organizations. The loss of these communities, was the starkest representation of the Armenian Genocide and the Seyfo in the final years of the Ottoman Empire.

Nevertheless, most Armenians today are unaware of the Seyfo and the mass destruction of Assyrians, which took place at the same time as the Armenian Genocide. Part of the reason for this ignorance is that prominent Armenian historians working in the 1980s and afterwards chose not to talk about the Seyfo.

Sarafian stated that he saw the Armenian Genocide and the Seyfo as two different aspects of a common event. However, there were differences in the manner in which people were killed and the killings reported in 1915. These differences broadly corresponded to two zones:

The Armenian Genocide zone encompassed historic Armenia and areas to the west of this region. The mass murder of Armenians (and Assyrians) in this zone was carried out under the veil of a deportation program. The Seyfo, on the other hand, was carried out in upper Mesopotamia, Hakkiari and north-western Iran, where most Assyrians lived. The word Seyfo, which means sword, characterized the manner in which people, mostly Assyrians, were destroyed in these areas. However, Sarafian noted, while Assyrians living in the Armenian Genocide zone were also deported and killed alongside Armenians, Armenians living in the Seyfo zone, such as in Siirt, Mardin and surrounding villages, were slaughtered as Assyrians.

The killings that took place in the Armenian zone was also more protracted and visible. Foreign consuls and missionaries reported what they saw of the killings. Tens of thousands of people were herded into deportation columns and marched across the Ottoman Empire. This was not the case with the mass murder further south, where people were slaughtered near their places of abode.

The destruction of Armenians was also reported in greater measure by foreigners living „in the Armenian zone“, but this was not the case with Assyrians who lived in more remote parts of the Ottoman Empire. Interestingly, American consuls and missionaries reported what they saw and their reports were leaked to the press as early as October 1915. This was not the case of Assyrians, except in north-western Iran, where once again Americans reported the carnage that was taking place – mainly against local Assyrians, as well as Armenians.

Nevertheless, the Seyfo was recorded by other eyewitnesses, Assyrians, as well as foreigners, such as Catholic missionaries, German consuls, and others. These records have surfaced over the past 90 years, but remained in relative obscurity when discussing the Armenian Genocide of 1915.

During question and answer sessions, many listeners raised the need for better scholarship in the field. Other listeners also stressed the possibilities for closer cooperation between Armenians and Assyrians in adopting a common strategy in lobbying lawmakers to protect remaining Assyrians and Armenians in the Middle East today. They pointed out that there were over a million Assyrians and Armenians in countries like Iraq, Syria and Turkey, where both peoples were still subject to political persecution.

The Seyfo Center USA will continue organizing further lectures and call for closer cooperation between Assyrians and Armenians today.

Assyrian American Association of San Jose in line with its constitution and bylaws would continue to collaborate with Seyfo Centrer USA on these educational seminars in the City of San Jose.