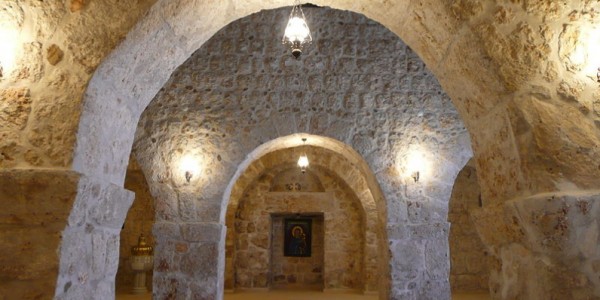 Tur Abdin, Turkey (AINA) -- Kurdish leaders from the villages of Yayvantepe, Eglence and Candarli, in cooperation with influential members of the ruling Justice and Development party (AKP), are continuing their so-called "lawful means" campaign to confiscate the land of the Assyrian monastery of St. Gabriel, founded in 397 A.D.

(AINA 9-16-2008).During the Ottoman Empire the monastery received the status of a Foundation for the Syrian Orthodox Church and is still legally regarded as such. Over the last three decades it has developed into a major religious and community center that attracts tens of thousands visitors from Turkey and abroad. The entire region has benefited from this development, though for some fanatic Kurdish village heads, it seems to be a problem.

As their initial efforts did not materialize and court hearings and trials have been postponed, the Kurdish leaders of the villages increased pressure by harassing the monastery with more false accusations:

* The Church is doing missionary work among youth

* The teaching in the monastery violates Turkish laws

* The monastery does not pay taxes

Meanwhile Bishop Samuel Aktas of St. Gabriel has issued a detailed report titled The Imminent Problems Facing the Syriac monastery of Mor Gabriel in Midyat, Turkey, while summarizing what he calls „alarming concerns“ the monastery is facing. The report is also replying in detail to the false criminal accusation filed as lawsuits; in fact, the latter are a means to harass the monastery and its inhabitants.

In order to investigate these and additional similar accusations, several court hearings are scheduled for December 2008:

* On Friday, December 19, 2008: The court will continue hearings that began on November 19th about the administrative borders of the monastery with its neighboring villages

* On Wednesday, December 24, 2008 (Christmas Eve): The court will continue hearings that started on November 14th, regarding Land which is labeled as „forest“ and that was confiscated by the State in pre-text of cadastral measurements. As a side note, it should be noted that Turkish Courts and Institutions knowingly disrespect Christmas Eve and schedule hearings on that day

* On Wednesday, December 31, 2008: The court will deal with the wall that was built by the monastery administration to secure its land, while the neighboring villages falsely claim that the wall stands on „their ground“ and hence needs to be demolished

Assyrians (also known as Chaldeans and Syriacs) living in Europe and elsewhere along with their Church organizations are closing ranks and are showing strong solidarity with St. Gabriel, while initiating appeals to EU institutions and European Churches for help and support. Janet Abraham, former Vice Chair-lady of an International Human Rights Organization and Board member of the Tur Abdin Solidarity Group says „Assyrians across all denominations are concerned about the new quality of harassment on the remaining Assyrians in Tur Abdin and especially on St. Gabriel. While it seems that the false accusations against the monastery are purposely not blocked in the first place by the Turkish Institutions and dealt with in a bureaucratic and jurisdictional process to maintain pressure, the perpetrators are indirectly encouraged to escalate their claims further and further.“

A joint press release issued by the Assyrian Democratic Organization, Assyrian Chaldean Syriac Alliance and Syrian Orthodox Church of Göteborg, on November 26, stated „the head of the village Yayvantepe threatened to burn the monastery and raze it to the ground in front of the military personnel and the state prosecutor,“ with impunity. St. Gabriel monastery is regarded as the oldest religious center of the community for centuries; a threat to the monastery endangers the very existence of the remaining Christian minority.

According to Abraham, the troubles of the St. Gabriel monastery have been already addressed in a German parliament speech on Foreign policy by Mrs. Erika Steinbach of the Christian Democratic Party, on September 17, 2008. Bernd Posselt, MEP, has submitted the matter to the European Parliament on October 9, 2008. In addition, various EU politicians expressed strong concern about the developments and promised or triggered support, among them Markus Ferber and Jens Holm. Germany’s largest Newspapers have written articles highlighting the plight of St. Gabriel.

In Germany, the highest Council of the Catholic bishops as well as the head of the Evangelical Churches promised support for the case as reaction to various appeals including from the Syrian Orthodox Church representatives. In reply to various requests by concerned Assyrians, the German Foreign Ministry replied on November 28 that, „The German Embassy in Ankara like other European Union (EU) member states as well as the EU Commission Representative in Ankara are closely observing the development concerning St. Gabriel and are in regular contacts with Turkish Government offices as well as with lawyers of the monastery“. Furthermore, „the situation of the non-Muslim minorities and the topic of religious freedom are essential parts of the political dialog, which the German Government conducts with Turkey, be it on bi-lateral level or be it on EU level.“ The German Foreign Ministry assures that they will follow the issues regarding St. Gabriel closely.

Assyrians over the world are following the case with fierce attention and hope that the Turkish judiciary system, after its apparent adaptation to EU norms, will speak justice and the Turkish authorities will stop the village heads, neighbors to St. Gabriel, from bringing defamatory allegations against such an ancient center of Christianity in Turkey.

Click here for more pictures of the St. Gabriel monastery.