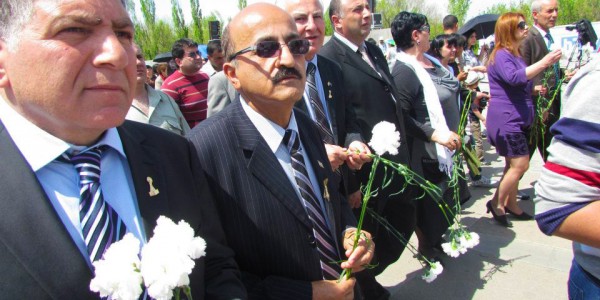 Sabri Atman, director of the Assyrian Genocide Research Center (Seyfo Center) spoke to the Republic of Armenia. He represented the Assyrian community and thanked for the erected monument in the city Yerevan.

May I express my deep thanks to the Armenian community and authorities in the Republic of Armenian and the City of Yerevan for making this day a reality. At the same time, I wish to congratulate the Assyrian community and organisations on your success with the erection of this beautiful memorial to the memory of the victims of the Assyrian Genocide.

In recent years, Assyrians have been working diligently towards greater public awareness of the Assyrian Genocide and for its recognition around the world. The genocide committed against the Assyrian people by the Ottoman Empire and other genocides, including the 1933 Semele Massacre in Northern Iraq are historical realities that have affected the lives of every Assyrian family. Close to 100 years after the Assyrian Genocide and 80 years after the Semele Massacre, Assyrians continue to fight for justice and recognition.

We Assyrians here today are the children and grandchildren who, because of the genocide, have fled our homelands and are now dispersed in the four corners of the world. The genocide which exterminated hundreds of thousands of our people destroyed our lands and forever changed the demographic of the area we called home for thousands of years. The results of this tragedy are still causes of great pain and suffering for us. We Assyrians standing here today are the children of a nation which was very nearly completely eliminated from the face of the earth.

98 years ago they thought they had succeeded in exterminating us; however my dear friends, the good news is that they were mistaken!

The spirit of the martyrs of Semele, Urmia, Hakkari, Van, Tur Abdin, Omid and Assyria are amongst us today. They have not been and never will be forgotten. Today, history is re-written here in Yerevan.

It gives me great pleasure to note that over twenty countries around the world have officially recognised the Armenian genocide. It is my hope that other countries will follow in their footsteps in also officially recognising the suffering and annihilation of the Assyrian and Greek peoples during the First World War.

As a representative of the Assyrian community I simply ask for justice for my people also; no more and no less!

To our Armenian brothers and sisters living here in Armenia and in the Diaspora we call on you to add the Assyrian and Greek victims to your demands for recognition. No three peoples have shared the common experiences and plight which we have! The bond between our three peoples has been forged in blood and anguish and our joint-suffering shall forever unite us.

We must never forget that both the Assyrians and Greeks were also victims of the 1915 Ottoman genocide. We demand that Turkey and all nations around the world recognise a historical reality.

At the same time I could not stand here without giving a loud call for the Republic of Armenia to be the next nation to recognise the Assyrian and Greek genocide. Indeed, morally, Armenia and Greece should have been the first countries to recognise the Assyrian genocide. If our Armenian brothers and sisters, a people who suffered the same horrific plight as us do not understand our cries for justice, then who, I ask you all, can understand?

The importance of friendship amongst Armenians, Assyrians and Greeks is vital in the fight to gain genocide recognition worldwide. The Armenian, Assyrian and Greek peoples have shared a common fate and should fight with one voice for justice. I believe we are truly capable of finding a method for internal dialogue so that we may speak in one voice until justice is forthcoming.

Our organisation, Seyfo Center, and all Assyrian organisations around the world have recognized and accepted that the genocide of 1915 was a genocide of three nations. We in turn ask that the Republic of Armenia be the next nation following Sweden to recognize and accept the Assyrian Genocide and pave the way for the rest of the world to follow.

As a proud Assyrian, I am entirely committed to seeking justice for my people; that the memory of our martyrs and their loss will not have been in vain.