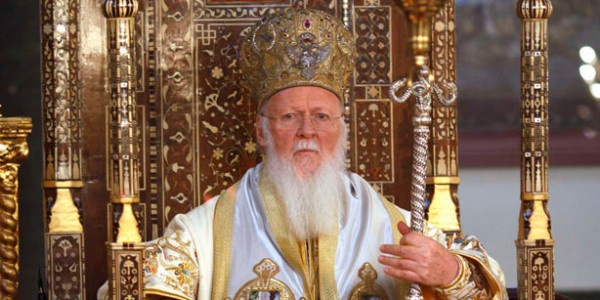 Greek Orthodox Patriarch Bartholomew is to give a speech in Turkish Parliament next wek in the framework of the new constutition. The speech will be the first such occasion in the history of the Turkish Republic.

Greek Orthodox Patriarch Bartholomew is set to give a speech to Parliament’s Constitutional Commission on Feb. 20 to expound on the problems of Turkey’s minorities, marking the first such occasion in the history of the Turkish Republic.

“Our Armenian deputy patriarch says we are happy and not beset by any problems every time a microphone is extended to him. To the contrary, we have problems [of such magnitude] that they are awaiting urgent solutions. Patriarch Bartholomew, on the other hand, does not shirk away from bringing up problems with great courage,” Arev Cebeci, a former deputy candidate nominee from the opposition People’s Republican Party (CHP), told the Hürriyet Daily News.

Bartholomew will bring up a number of issues in the commission, including the reopening of the Halki Seminary, the removal of unfavorable statements about Greeks, Armenians and Syriac Christians from Turkish class books and the employment of minorities in public offices.

Bartholomew was invited to Ankara within the framework of ongoing efforts to draft a new constitution for Turkey, although the move has led to criticism from some quarters within minority communities.

“We want to see concrete steps rather than the patriarch being summoned there,” Kuryakos Ergün, the head of the Mor Gabriel Monastery Foundation in the southeastern province of Mardin, told the Daily News.

The patriarch is also going to raise other issues in Parliament as well, such as the recognition of minority institutions as legal entities and the funding of minority houses of worship through the budget of the Directorate of Religious Affairs.

“We have problems of identity, recognition and language. Most important of all, we are experiencing great difficulty in training clerics,” Ergün added.

It is important for Bartholomew to deliver a speech in Parliament, he said, but he also expressed reservations about the sincerity of the government in Ankara.

Turkey’s minority communities have more problems in common than they have differences, he added. “Now we are demanding a solution to our problems. Dialogue is very important. We have been treated as third class citizens through this day, and this situation has to come to an end,” Stelyo Berber, the head of Istanbul’s Fener Hagia Yorgi Church Foundation, told the Daily News.