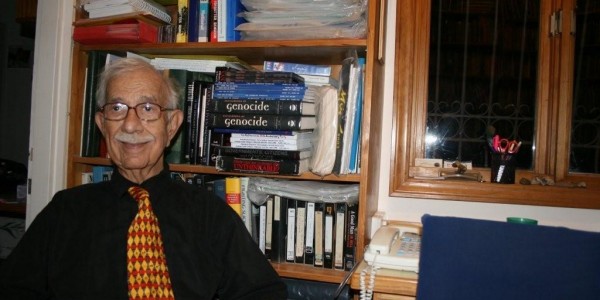 Prof. Israel Charny is a worldwide known and respected genocide scholar. I have had the pleasure to meet him first in Bosnia and then, last year, in Athens. The interview below was conducted via email. I would like to thank Mr. Charny for answering these brief questions.

Prof. ISRAEL W. CHARNY is the Executive Director of the Institute on the Holocaust and Genocide, Jerusalem. He is also a retired Professor of Psychology and Family Therapy at Hebrew University of Jerusalem and Tel Aviv University, Editor-in-Chief of GPN a new worldwide Web Magazine with support of the Carnegie Corporation, NY. He was the Editor-in-Chief of the ENCYCLOPEDIA OF GENOCIDE, published by ABC-Clio Publishers, US and UK. He is the author of FASCISM AND DEMOCRACY IN THE HUMAN MIND, published by the University of Nebraska Press. Both the encyclopedia and the book on fascist and democratic thinking were awarded „OUTSTANDING ACADEMIC BOOK OF THE YEAR“ by the American Library Association. He is the author of FIGHTING SUICIDE BOMBING: „A WORLDWIDE CAMPAIGN FOR LIFE“ published 2007 by Praeger Security International [Greenwood Books], and republished in India and Sri Lanka along with the Praeger edition by three publishers: Penguin Books, Pentagon Press, and Lancer — for years Sri Lanka was the hub of hundreds of suicide bombings, a third of them by women.

What do you know about Assyrians and the Assyrian genocide?

I know that the Assyrians were annihilated, often right alongside neighboring Armenians, by the Turks in what we otherwise call the Armenian genocide. Estimates of the number of deaths of Assyrians- like all genocides the numbers vary and we don’t have absolute accuracy – seem to range between 300,000 to 700,000.

What would you recommend us to do to raise global awareness about the Assyrian Genocide, Seyfo?

The Armenian people have done a magnificent job of recovering their history, and their pride and security in themselves to have embarked on excellent campaigns to gain cultural and also legal recognition of the Armenian genocide. Over the last years we have succeeded in a number of instances in adding recognition of the Assyrians as co-victims-also the Greeks and Yezidis. See for example the bitterly fought resolution in the International Association of Genocide Scholars, which in 2007 recognized the Assyrians and Greeks as genocide victims with the Armenians.

Why is it important not to forget the past genocides?

What do you think the reason is for Turkey’s denial of the Armenian, Greek and Assyrian Genocide?

Turkey clearly suffers from a pathology of an inability to acknowledge error and failing and wrongdoing. Every individual alive and every nation make serious mistakes, and the way to live with these, and to contribute to healthier humanity for all of us, is to acknowledge our failings humbly and responsibly. Turkey suffers from a pathological fear of shame, the result of which is only the greater shame of the Turkish people as censoring and opposing truth and integrity.

Do you think Turkey will ever recognize the Genocide it has committed during the Ottoman Empire against the Christian minorities, namely, Armenians, Greeks and the Assyrians?

Under Erdogan, no. He may have yet to do terrible new damages to ethnic groups. He is a basic Islamic fascist to the Kurds whom he is, in fact, attacking regularly, or to Armenians whom he has threatened with deportation, or to Jews in neighboring Israel against which he has embarked on an anti-Semitic vendetta. And, yet, in recent years, even under Erdogan’s rule, there have been many encouraging trends of Turkish people and media speaking up for the recognition of Turkey’s (Ottoman Empire’s) past genocidal actions. Today we have the utterly strange situation of some of this courage continuing even as the Erdogan regime now is increasing sentencing to jail many people for (as if) insulting the Turkish people (the infamous 301 Law), and Erdogan himself becomes more belligerent and bellicose.

What do you think the similarities are between the Holocaust and Seyfo?

Genocide is the same for all victim peoples. The tragedy and evil are the same. Methods of implementation, historical contexts and more vary – thus the genocide in Rwanda is carried out differently than the Holocaust – but the killing of innocent civilians is intrinsically the same.

Do you think one day Israel will officially recognize the Armenian, Assyrian and the Greek Genocide and what can we do to make that a reality?

We never give up in our efforts in Israel. In general, we have won the cultural battle in that our media provide reports of the Armenian Genocide fairly regularly, and there is relatively little denial on a cultural level- although there definitely is some, including under the influence of Prof. Bernard Lewis who otherwise, justifiably, is an intellectual hero to many Israeli scholars who have been duped by his anti Armenian stance. The Assyrian and Greek genocides are less recognized, but then this has been true even in the world community of the genocide scholars where we are just beginning to generate awareness.
Israel, the political entity, may or may not. The Knesset has voted to hold hearings on the Armenian Genocide. Something decent is stirring here on political front too in the way of protest against the disgusting realpolitik, self-interest denials by the Israeli government for so many years.