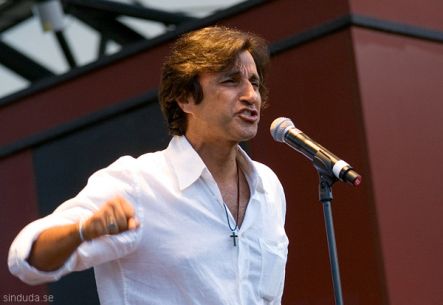 The Swedish Queen and Nuri Kino are two of those chosen as winners of the Blatte De Luxe award. The award is given to individuls who has done something extra ordinary for the rest of society. Kino is the only person to win the prize ”Role model of the year” two years in a row. The swedish people and the jury saw no other journalist worthy of the award.

Nuri Kino is awarded because he has uncovered irregularities both in Sweden and the rest of the world, contributing to make the world a better place. Swedish queen Silvia recieved the award due to her involvement all over the world in stoping child abuse.

”Both my parents are illiterate and I made it this far, you should do it too, but nothing is for free, you must work very hard”.

And his final notes were:

”I’m a proud immigrant, I’m a proud Assyrian and I’m a proud Swede. But I’m a human being foremost and together we can bridge all barriers”.

The motivation of the jury was the following:

Because he’s an excellent journalist who digs deep in order to expose injustices both in Sweden and the international community. He delivers one big disclosure after the other, recieves death threats but doesn’t give up. He works for world media but still lives in Södertälje (Sweden) and is a role model for many young people.