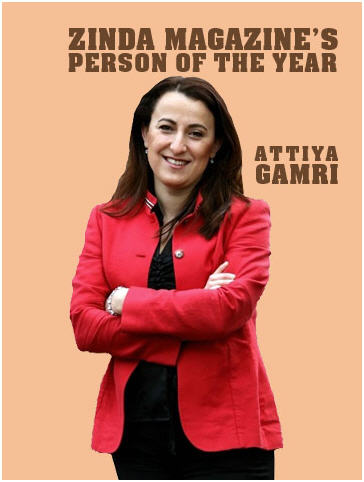 Ms. Gamri was born into the Beth Arsan tribe of the village of Arbo in south-east Turkey (North Assyria) in the region of Tur-Abdin or North Assyria. She is the youngest daughter in a family of 4 sisters and 3 brothers.

Under the leadership of her uncle, Habsuno Beth Arsan, great grandfather Isa Beth Arsan (father of Gamri Beth Arsan) and Gallika (Gawriye) Beth Arsan her tribe played a leading role in the defense of the Beth-Rishe (Rayitte) region at Mount Izla (Tur Izlo) in 1915, when the Seyfo Genocide was devouring the Assyrian homeland.

In the 1930’s the Turkish government began a forced Turkification policy on the non-Turkish minorities of Tur Abdin and forced Ms. Gamri’s tribe to carry forth using two Turkish names instead – Tunc and Aslan. Even today her name is sometimes written as Attiya Gamri Tunc.

In 1988 Ms. Gamri became an active member of the Assyrian Mesopotamian Association of Enschede. By now she was also active in the Assyrian Democratic Organization in Holland, the Assyrian Federation Tur Abdin, and began writing articles for the Shemsho Assyrian magazine.

She helped establish the Help Assyrian Christians Foundation in 1992, as the western media was slowly becoming aware of the plight of the Christians in north Iraq and Saddam Hussein’s Anfal Campaign. She began collecting money for the Assyrians as requested by the Assyrian Democratic Movement in North Iraq.

By now it was clear to Ms. Gamri that Assyrian political leaders had failed to solve or even to offer effective solutions to the major problems in the Diaspora and in Assyria. It was time to turn the Assyrian Dilemma into a European Dilemma.

Attiya Gamri completed a B. S. in Social Sciences in Netherlands in 1995 and two years later at Sweden’s Goteborg University she was conducting research on the psychology of women. In the same year she ran a campaign and was elected on the Labor Party or PvdA ticket in Holland and appointed to the consulting committee of the city of Oldenzaal.

In Netherlands she had worked at the “House for Abused Women” in Zwolle, helping battered women who needed intensive therapy due to physical & psychological abuse. She was also a team leader and youth social worker for the homeless youth in Hengelo, Enschede and Almelo – all three cities on the east side of Holland. Her political work gave her a new venue to help the women, the youth, and increase awareness about the Assyrians everywhere.

Between 1996 and 1998 she was preparing a variety of television documentaries and interviews, events and festivities for the Assyrians in Europe in the Western Assyrian language.

In 1997 she traveled to Iran and spent a month among the Assyrians of Urmia and Tehran. Little did she know that this journey through the valleys of Lake Urmia was going to be a life-changing experience.

She was taken to the historic locations where the Assyrian visionaries before her had faced difficult challenges as she and other Assyrian nationalists do today. She walked along the roads and the hills of Urmia where men like Agha Petros led the Assyrian armies to victory and visited the grave site of the Assyrian patriarch – Mar Benyamin Shimmun – cowardly killed by the Kurdish chief, Semko. These and other men like Dr. Fereidoun Atouraya had a vision for the Assyrian nation and believed in this nation they affectionately called “Assyrian”.

After visiting the site where Semko and his Kurdish troops killed the Assyrian Patriarch who had just minutes ago shaken his hands in the spirit of peace and understanding, Ms. Gamri understood the vision of the Assyrian leaders before her: Assyrians need a free Assyria. From that moment on she began working more diligently to regain the political and human rights of the Assyrians in Assyria.

Soon after her return from Iran she was coordinating programs and television shows in both Eastern and Western Syriac (Aramaic) in an effort to bridge the gap between the two Assyrian linguistic communities in Europe and elsewhere.

The following year she found herself among the Assyrians in Syria and Lebanon.

In 2002 she began writing for the Nsibin newspaper. Ms Gamri earned a Masters Degree in Management in the Netherlands in 2003. This was also the year when she visited the Syriac Orthodox Churches in India and ran as a PvdA candidate and was elected to the state government of the Dutch province of Overijssel.

The first of her three trips to the heart of Assyria took place in 2004 when she visited the Assyrians in north Iraq a year after the fall of Saddam Hussein.

The Assyrians of Sao Paolo, Brazil greeted Attiya Gamri during her visit in 2005 – the year she also visited the Assyrian Monastery of Dair a-Suryan in Egypt.

In 2006 Ms. Gamri returned to Iraq, along with several other Assyrian observers from Europe and North America.

In November 2007 Ms. Gamri helped found the Assyria Council of the European Union – a lobby group for the Assyrians in Europe.

In March of this year Ms. Gamri was re-elected to the state government of the Dutch province of Overijssel. She ranks high among her colleagues in the Labor Party and enjoys a wide support of her constituency.

A month after this political victory she returned to Iraq on her third trip to Assyria’s heartland. She met with Father Sanharib. He found an attentive Assyrian politician in her and was obliged to give her his opinion: “There is a genocide going on, just like the one my father had experienced in Hakkari. Every 100 years there is a genocide against the Assyrians. My daughter, you have to make the Assyrians in Iraq be aware of this, tell them the Muslims are killing us, we need a place to live, our own place without the Muslim Kurds and Muslim Arabs deciding our future, in the heart of Ashur. My son will never see this, but yours should .”

Father Senharib was later killed in Baghdad. His words reaffirmed what she had earlier understood as her objective in life, walking in the footsteps of the freedom fighters before her.

Attiya Gamri decries the current political stagnation in the diaspora and the political parties‘ contempt for what is being done by the independent groups in Iraq. Her collusion with the ruling political party in Iraq, the Assyrian Democratic Movement, is seen as dangerous, radical, and unprecedented from both North American and European Assyrian communities. Yet, she believes in working directly with the independent voices of Assyrians in Iraq, Iran, Syria, and Turkey.

Ms. Gamri is a leader of incomparable courage, vision and humanity. Today, she is the only Assyrian leader in the Diaspora who leads by example, helping the Assyrian refugees, needy, women and children, and most importantly brings the two linguistic communities closer together. Thousands of youth in Europe know her as their Assyrian idol and attend her speeches and lectures around the continent.

The higher purpose of her „historical“ position in the Assyrian politics – the political advancement of women and the youth and giving a voice to the independent silent majority in Iraq – will propel Attiya Gamri to greater achievements in the future. She is bound to be the most powerful Assyrian woman politician in the Diaspora. Most observers of the current conditions would agree that the Assyrian nation could use someone like Gamri to help shake the old-boy Assyrian tribal politics before it is too late.