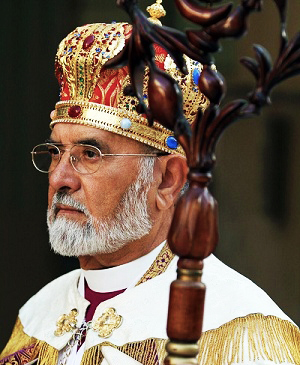 (AINA) - His Holiness Dinkha IV, the Patriarch of the Holy Apostolic Catholic Assyrian Church of the East, has send a letter to the United Nations expressing alarm and concern over the anti-Christian violence in the Middle East.

Citing the escalating sectarian violence, the Patriarch said „…we call upon the United Nations and all the nations of the international community to dl all that is within their diplomatic means to end the sectarian violence in the Middle East, particularly in Syria, in a peaceful and responsible manner.“

Since 2003 more than 50% of Assyrians have fled Iraq, an exodus caused by a low-grade genocide against the Assyrians perpetrated by Kurds, Sunnis and Shiites. Iraq’s Assyrian population has decreased from 1.4 million in 2003 to 700,000 today. Most of the Assyrians fled to Syria and Jordan, where they comprise nearly 40% of the refugees, even though they are only 6% of Iraq’s population. 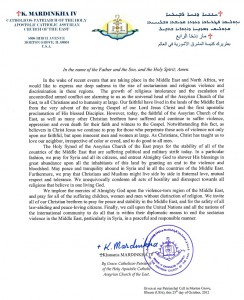 This is the letter of Mar Dinkha IV.