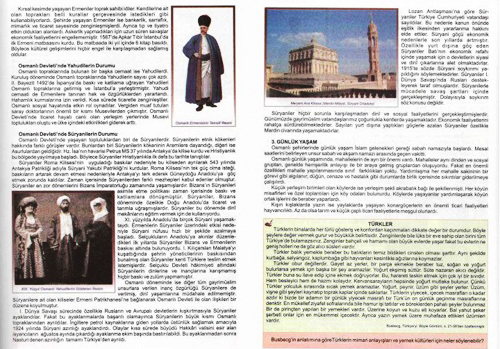 Turkey (AINA) -- A history textbook used in tenth grade high school classes in Turkish schools portray Assyrians as traitors and presents distorted historical information about Turkeys most ancient indigenous population. The issue was highlighted in 2011 by Erol Dora, an ethnic Assyrian and member of the Turkish national assembly. Following meetings between Dora and the Turkish ministry of education, the ministry issued a statement promising to revise the controversial texts in the next printing of the book in 2012.

Erol Dora held a press conference on October 16 to report that the textbook has recently been reprinted without any changes. In fact, the negative and slanderous portrayal of Assyrians has increased in the new edition. The book now not only portrays Assyrians as traitors in the past but says the Assyrians continue their betrayal of Turkey today. Erol Dora is now asking the Turkish minister of education, Ömer Dincer why he has failed to keep his word and who will be responsible for how the text affects Assyrian students in Turkey. Ömer Dincer had previously claimed that the textbook in question was printed before his tenure.

Turkey’s aspirations to become an EU member have seen serious setbacks as the country continuously fails to respect human rights and the rights of its ethnic minorities.