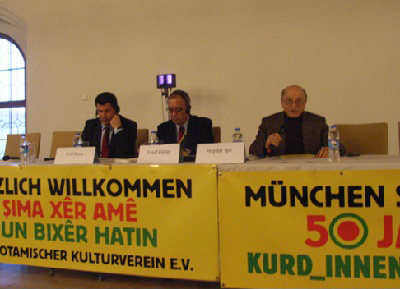 However, most of those events did not properly reflect the ethnical and religious mosaic of Turkey. Most politicians and the mainstream media continue to talk about „Turkish workers“ that came to Germany as ‚Gastarbeiter‘ (guest worker), ignoring the fact that among the migrants also many Kurds, Assyrians (Turkish: Süryani), Armenians and Alevis arrived in Germany to work and live with their families.

During December 15-18, Kurdish Mesopotamia Association organized an anniversary event on this same occasion with a rich program that included three political panels, an exhibition and a musical event. This was done in cooperation with the Social Democratic Party (SPD), the Green Party in Munich along with the city’s cultural board.

The political panels were held on Friday, December 16th in Munich’s old City Hall with more than 300 people attending, including Kurds, Assyrians, Alevis and Germans.

The first panel focused solely on the situation of the Assyrians in Turkey. Panel speakers were Erol Dora, the Assyrian member of Turkish Parliament, attorney and member of the Peace & Democracy Party (BDP) together with the former chairman of the Turkish Human Rights Association (IHD) and lawyer Yusuf Alatas, while moderation was done by Haydar Isik, a Kurdish writer.

The second panel discussed the situation of the Kurds in Munich while the third panel focused on the political conditions of the Kurds in Turkey; the latter highlighted BPD member Leyla Zana, also member of Turkish Parliament, as well as attorney Yusuf Alatas.

The panels were opened by a short speech of Munich’s mayor Hep Monatzeder who said that based on the agreement signed between Turkey and Germany „people from all ethnic groups came to Germany to work and live here. Among the people who came to Germany were Assyrians and Kurds that were in Turkey even not [officially] recognized to exist“.

After an opening message by Haydar Isik, who moderated the first panel, Erol Dora gave a short historical outline on the Assyrians in Middle East as indigenous people, briefly touching their current political and social situation in Iraq, Syria and Iran.

With respect to Turkey, Dora focused on the legal status of the Assyrians in the Turkish Republic in the framework of the Treaty of Lausanne (of 1923), underlining that Assyrians lacked recognition as a ’non-Muslim minority‘, whereas Greeks, Armenians, and Jews received certain religious and cultural rights; still all of them have been discriminated. Dora further touched on the background of the mass migration of Assyrians from Turkey to Europe since the 1970s, hinting that currently more than 80,000 of Assyrians from Turkey and other Middle-East countries live in Germany.

Lawyer Yusuf Alatas characterized the situation of the Christians and specifically that of the Assyrians as a „bleeding wound“ and stressed that they „are among the oppressed people in Turkey“. But compared to others, „they are oppressed religiously, too“, he said. He stressed that, „as long as the Kurdish question in Turkey is not solved“, issues related to democratization will not be resolved in a satisfying manner. Alatas pointed out that, despite Turkey’s constitutional commitment to equal rights for all citizens, Assyrians „have not even been regarded as citizens“. Despite being one of the oldest people in the region, they have actually been „regarded as aliens“. According to Turkey’s constitutional court, all people are equal, but obviously some are not!

Alatas as well briefly addressed the legal status of the ‚acknowledged‘ minorities in context of the Lausanne Treaty and pointed out the school situation and the supposed educational freedom they enjoy: each of the minority schools has to accept a deputy director of Turkish origin while the children have to start class lectures every morning with nationalistic Turkish songs praising Atatürk, like „Türküm dogruyum ….Ne mutlu Türküm diyene!“ („I am a Turk, honest and hardworking… How happy is the one who says I am a Turk!“).1

Alatas concluded his initial statements by calling the Turkish school textbooks, where Assyrians are depicted as collaborators and indicted of treason, a scandal and also criticized the continuing legal siege of Mar Gabriel Monastery.

Early in the same week (see hristiayangazete.com), Dora organised a press conference at the Turkish Parliament in Ankara, criticizing the textbooks published by the Turkish Education Ministry as abusive to Assyrians and Armenians. Dora also met with the Education Minister Ömer Dinçer on December 15, 2011 to discuss the problem; according to a statement by Dora, the Minister expressed his discomfort with the textbooks and that they „were printed in 2009, which is earlier than he took office.“ The Minister promised to act immediately on removing the insulting statements. Dora is convinced that the Minister will do his duty to make sure that the children and youth will not grow up in a world full of prejudice.