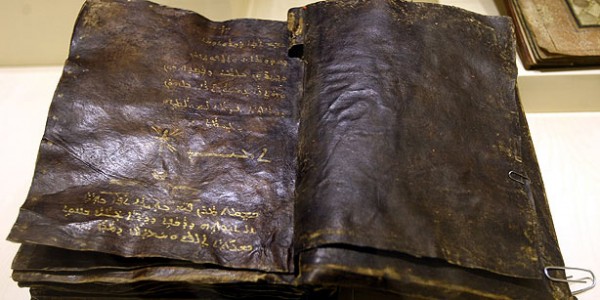 (AINA) -- Much has been made of the recent discovery in Turkey of a Bible purported to be written in the Aramaic language, 1,500 years ago. The Muslim media, as well as Western media outlets, quickly pounced on this, claiming this Bible contains verses attributed to Jesus Christ, in which Christ predicts the coming of Muhammad. No media outlet has published a facsimile of these verses.

This „Bible“ is written on leather in gold letters. The picture of the front cover show inscriptions in Aramaic and a picture of a cross.

For any native speaker of Modern Assyrian (also known as neo-Aramaic), and that would be your average Assyrian today, the inscription is easily read. The bottom inscription, which is the most clearly visible from the published photos, says the following:

Translation: In the name of our Lord, this book is written on the hands of the monks of the high monastery in Nineveh, in the 1,500th year of our Lord.

Nineveh is the ancient Assyrian capital and is located in present-day north Iraq, near Mosul.

There are spelling errors that are immediately noticeable.

The first word, b’shimmit maran („in the name of our Lord“), is erroneously spelled with a ‚t‘ instead of a ‚d‘. The ‚d‘ in Assyrian is the genitive, and it prefixes the word that follows. It should read b-shimma d-maran, not b-shimmit maran (note, the last word of the sentence is correctly spelled d-maran („of our Lord“)).

The first word also contains another spelling error. The correct spelling for „name“ in Assyrian is ashma, with the initial ‚a‘ being silent. Therefore, when correctly spelled, ‚in the name of our Lord“ should be written as b-ashma d-maran.

The word idateh is misspelled, it should end with an ‚a‘, idata. Also the phrase al idateh („on the hands“) is incorrect, it should read b-idata („by the hands“).

The bottom sentence uses the word ktawa („book“) to refer to the book, but in Assyrian the Bible is never referred to as a „book.“ One says awreta (Old Testament), khdatta (New Testament), or ktawa qaddeesha (holy book). Given this, since no one has seen the inside of this „Bible,“ we cannot be sure if it is in fact a Bible. 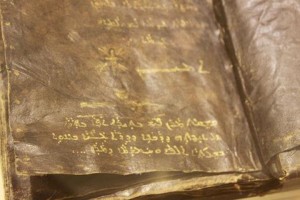 It is highly unlikely for monks to make such elementary mistakes. It remains to be seen whether this book is a forgery, or even what kind of book it is.

The bottom inscription also says the book was written in 1500 A.D.. If the book does contain verses predicting the coming of Muhammad, it is no great accomplishment to predict something 870 years after the fact, since Muhammad founded Islam in 630 A.D..

Most media outlets, as well as Muslim and Christian outlets, lead the story with headlines pronouncing „1500 year old Bible predicts the coming of Muhammad“ — without any evidence to support this.

For Muslims, the implications of the headlines are desirable, that Jesus Christ is a Prophet, just like Muhammad, and not the Son of God. According to Al Bawaba, the Turkish culture and tourism minister, Ertugrul Gunay, said „In line with Islamic belief, the Gospel [this Bible] treats Jesus as a human being and not a God. It rejects the ideas of the Holy Trinity and the Crucifixion and reveals that Jesus predicted the coming of the Prophet Mohammed.“

Commenting on the errors in the book, Al Bawaba says in another article:

This same article ends with „According to many studies, the gospel attributed to St. Barnabas was written by a European Jew in the Middle Ages who was quite familiar with the Quran and the Gospels. He, thus, mixed facts from here and there and his intentions remain unknown.“

But despite the availability of information on this „Bible,“ most media outlets, Muslims, liberal and secular organizations have portrayed this discovery as something that undermines Christianity, ignoring the many problems with this book and presenting it as virtual fact. In fact, in their zeal to support the anti-Christian narrative, they have withheld or suppressed information questioning the authenticity of this book. For these organizations and individuals, this is another tool in their arsenal for the attack on the foundations of Christian doctrine.

By Peter BetBasoo and Ashur Giwargis