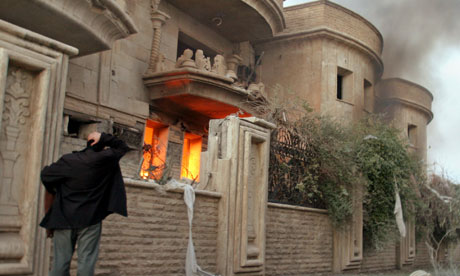 Smaller communities such as the Assyrians are being squeezed still further. Their fate is a crucial test of Iraq's democracy.

Inspired by the violent exhortations of a preacher during Friday prayers earlier this month, hundreds of young Kurdish men in the northern Iraqi town of Zakho went on a riot. Over four days, they set dozens of liquor stores alight, later threatening proprietors with further violence if they dared reopen their businesses. They also attacked an Assyrian church and homes in the neighbouring village of Mansouriyah and destroyed property including four hotels, a health club and an Assyrian social club in Dohuk.

The victims were Assyrians – an ethnically and linguistically discrete people also known as Chaldeans or Syriacs according to denomination – and Yazidis, members of two ancient communities who, like all the vulnerable elements of Iraqi society, have suffered disproportionately in the aftermath of the war.

The staggering upheaval and violence faced by Assyrians has led to a drop in their numbers from at least 800,000 in 2003 to 400,000 today. They represent 35% of Iraqi refugees since the war, as well as an enormous number of Iraq’s internally displaced persons.

The unequal suffering thrust on to Iraq’s smaller communities is a reflection both of their being singled out for persecution by majority peoples – primarily Sunni Arabs and Kurds in the Assyrians‘ case – as well as the absence of a security apparatus deployed on their behalf.

The Kurdistan regional government (KRG) responded to the Zakho riots by paying lip service to Kurdish „traditions of ethnic and religious co-existence“ – though there was little sign of such traditions being observed. The riots themselves were completely unpoliced, though the authorities rounded up members of the opposition Kurdish Islamic Union and razed its Dohuk headquarters, despite no evidence of KIU culpability.

This is further evidence that the Kurdish government places its own desire for absolute control of the ever-elastic „Kurdistan“ region above protection of the minority peoples over whom it rules (and even the Kurds under its jurisdiction). As Assyrians continue to flee gangsterism and persecution in Iraq proper, large numbers of them have sought refuge in the largely Kurdish-controlled north.

The KRG describes these Assyrian refugees merely as „Christians“ to de-legitimise them ethnically and therefore politically, and utilises them as demographic padding for its aim of expanding the territory it controls. Despite claims that the KRG is better able to provide for the security and welfare of Assyrians, these refugees frequently lack access to basic services, let alone civic rights.

While the KRG’s policies predicated on ethnic supremacism and expansionism are thus doing great harm to non-Kurdish indigenous groups in and around the land they control, the Sunni-Shia fissure within the Iraqi government, now unfolding in an accelerated manner immediately following US withdrawal, threatens to jeopardise the integrity of Iraq.

The consequences of further sectarian fracturing in this most fissile of nations are as yet unclear. But minorities caught in the political and physical crossfire of larger groups – groups that often call upon support and direction from countries outside Iraq – will find themselves in greater danger.

Whatever popular will the Iraqi people might have to see the indigenous diversity of Iraq remain intact, the propensity of terrorists to use unlimited violence in their attempts to cleanse the country of Christians, coupled with the failure of the government to cohere and protect its citizens, renders this will unviable within the present political conditions.

The most serious proposal to safeguard the continuity and flourishing of Iraq’s minorities revolves around the development of the Nineveh plains region, headed by the Iraq Sustainable Democracy Project and the Nineveh Project. The Nineveh plains are not only the historical homeland of the Assyrian people and a crucible of pre-Arab and Kurd pre-Islamic Mesopotamian civilisation, but it is a province where a majority of the population is currently drawn from the minorities, around half of whom are Assyrians.

Central to the proposal is circumventing both the political and religious leadership that has shown itself so willing to buttress Kurdish expansionism at the expense of Assyrian interests. The KRG has systematically intimidated Assyrian political leaders who have expressed support for the Nineveh Project, and has sought to flood the territory with Kurdish citizens and security forces, delaying a referendum on the status of the region in the hope that an increase in the Kurdish populace and a weakening of political will among divided minority groups will allow them to annex the plains.

The work of the Assyrian American Coalition and other organisations has already drawn some response from the American government. The US State Department has allocated funds to Iraqi minorities; and on 17 December, the Senate and House passed a bill giving „targeted assistance to ethno-religious minorities in Iraq to help ensure their continued survival“. The bill seeks to facilitate and reinforce the aims of the Nineveh Project and is encouraging in that it recognises needs particular to the indigenous peoples of the plains, including the necessity of building „an indigenous community police force“.

If the existence of some of the world’s most ancient peoples is to be rescued, then it will be through the co-ordinated activities of free men and women reclaiming their destiny from the jihadist murder gangs, the cronyism and venality of politics, and church elders who have long since proven to be more concerned with their own institutional authority than the lives of their faithful. The Nineveh plains will be a crucial test of Iraq’s democracy, and a nexus of hope for its most beleaguered citizens.