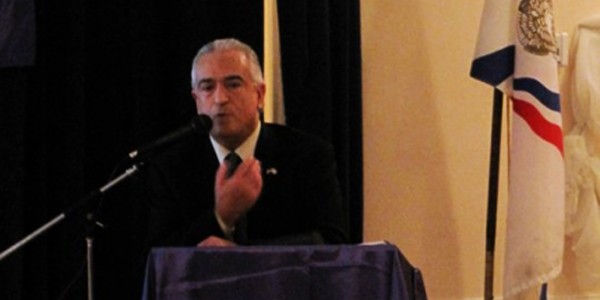 David William Lazar was born in Baghdad in 1959, the family left Iraq in 1965 and he grew up living in Kuwait and Lebanon. In 1979 he arrived in Los Angeles from London as a prospective university student. In 1980 he co-founded Assyrian Students Society at California State University, Northridge. In 1982 he represented the Western Region of the US at the Assyrian Universal Alliance Congress that was held in Los Angeles.

In 1987 he joined the ranks of the Assyrian Democratic Movement (ADM) and co-founded the US and Canada Branch. In 1991 and 1992 represented ADM in several Iraqi opposition conferences and meetings that were held in the US. In 1991 co-founded Assyrian Aid Society of America and in 1992 was elected President of Assyrian American Association of Southern California. In 2009 co-founded American Mesopotamian Organization, Political Action Committee and is currently serving as its Chairman. David has a BS in Industrial Engineering from California State University Northridge and an MBA from University of Phoenix. David has been married to Ninva Younan for 17 years and they have two children, Delmin William and Tiamet Marlin.

As Chairman of AMO (American Mesopotamian Organization) what can you tell us about your political action committee?

The organization was established in May 2009 in Los Angeles as a non-profit California entity; however we didn’t have any political activities until early November of the same year. As an American Political Action Committee our objectives are to influence US policy on matters of interest to Assyrian Americans, the community has many concerns on its “long list” but on the very top of this list is what we believe to be the most important item which is the establishment of the Nineveh Plain Province in Iraq and having it connected to the Federal Government in Baghdad. In other words we are working on gathering support in US Congress and Senate on the full implementation of Article 125 of the Iraqi constitution to form this province and then the implementation of article 140 to regain our lands in the Nohadra Province and unify them with Nineveh Plain Province. These are our ancestral lands that are currently under Kurdistan Region Government occupation. You might ask why would you refer to these lands as being “occupied” when the KRG is part of the Federal Republic of Iraq, my answer is straight forward and to the point; we’re convinced that the KRG and its tribal leadership will attempt to secede from Iraq in the near future, there is a slim chance that they might be successful in their efforts but even if they fail to secede they will continue to act as if they are a “privileged” entity within the country always threatening “to leave” if things don’t go their way and they will maintain their policies of Kurdification of our lands and their primary goal of achieving an “ethnically pure” Kurdish region similar to what they were able to accomplish in Turkey and Iran

What made you start this committee?

American Mesopotamian Organization was established to be the voice of our people that otherwise will not be heard either because the other Assyrian American entities were established as social clubs and/or they are not interested in the plight of their brothers and sisters in the Middle East. We also have several establishments that have been around for many years that could have taken on an advocacy effort but they have failed to do so until now because they are controlled by individuals or groups with loyalties to the Baath regime in Syria, the Islamic Republic of Iran or the Kurdish Regional Government in Northern Iraq and for some of them to all three governments. These are the same individuals and organizations that at one time or another had ties to the regime of Saddam Hussein or his adversaries in Damascus and Tehran.

What made you choose the name Mesopotamian instead of Assyrian?

We decided to call the organization American Mesopotamian for multiple reasons and they are as follows:

a- Our efforts for now might be concentrated on the aspirations of our nation in Iraq but in the near future we anticipate being directly involved and advocating for our nation’s rights in Syria, the recognition of the Genocide by Turkey and the Human Rights of our people in Iran. The historical name for this part of the Middle East Region where our people have dwelled since time immemorial although first used by Greeks and Arab occupiers has been Mesopotamia.

b- The American public recognizes the Mesopotamian region as the cradle of civilization because they are taught this in school, hence easier name recognition.

c- We didn’t want to be part of an endless debate over the name issue when the absolute majority of our nation believes that we are one nation and of the same ethnicity. I would also like to add here that we believe we are Assyrians and at the same time respect all other names used by our churches and institutions.

d- Our logo is our statement that we are Americans proud of our Assyrian heritage and just as we are proud of all other names used by our churches throughout our history such as Chaldean, Nestorian, Jacobite, Syriac and Aramean we are also proud of our Mesopotamian identity.

What are some of AMO’S accomplishments?

It is very difficult to measure the success of organizations such as ours unless we achieve the goals we have set for ourselves. As I said earlier our most important goals at this time are to help our people in Iraq with their struggle to establish the Nineveh Plain Province and to liberate our lands from the occupation and dominance of the KRG. We have also set a goal of having a full-time “Policy Director” with supporting staff in DC in the near future. I would consider the establishment of the Nineveh Plain Province, the liberation of our ancestral lands and the creation of a Policy office in DC as successful accomplishments, everything else I would still consider important, but secondary. In other words and what I’m trying to say here is that we have yet to accomplish any of our goals.

How can these lobbying activities influence American policy in the Middle East?

The American political system is unique in the world and in my opinion far superior to that of any other western democracy. The division of power between the three branches of government, two of which are directly elected by the citizens, allows for advocacy and lobbying activities to influence decisions of elected officials. We as an organization have chosen to support the officials that believe in our causes by contributing financially to their election campaigns as well as by gathering hundreds if not thousands of signatures from Assyrians and non-Assyrians alike in support of our initiatives. In a Constitutional Republic the opinions and requests of constituents matter to elected officials. We as Assyrian Americans have a very unique position within American society because we have been oppressed and massacred over the centuries by our Muslim neighbors (Arabs, Turks and Kurds) mainly because of our Christian faith and in the past few decades because of our ethnicity as well.

The American public opinion is always in support of the oppressed and against the oppressor, and the fact that we are the descendants of the earliest Christians and our language contains many Aramaic words and is the closest language to what Jesus spoke in addition to being mentioned in numerous prophecies of the bible, gives us support among the American public that other ethnic groups that currently reside in the Mesopotamian region will never be able to muster regardless of the billions of dollars they spend in hiring lobbyists and Public Relations firms. Having said that we also need to make sure that our nation’s interests as Assyrians align directly with those of the United States of America, this is exactly what the Sunni Arabs and European Jews were able to accomplish immediately after WW1 and WW2 which was to align their national interests with those of the British, the French and later American interests in the region.

We must also not forget that Turks and Turkey had allies and they too must apologize and pay compensation to the descendants of those killed and their properties confiscated, by this I mean the Kurds and the fact that they now have a Regional Government in Iraq that flies a unified Kurdish flag and claims that what is now known as “Iraqi Kurdistan” is only part of a greater Kurdistan and should be referred to as Southern Kurdistan. Such statements were made by Kurdish leaders like Barazani and Talabani on many occasions and on Kurdish and International Media outlets. This leaves us to conclude that the KRG is a representative government of the Kurdish tribes that actively participated in the massacres and were the direct benefactors of the outcome by taking over our lands, homes, personal belongings and in many cases enslaving our women and children. A government such as the KRG that includes the name of the thug, Simco, killer of the Patriarch Mar Benyamin Shamoun as a national hero in the Region’s Schools curriculum, basically teaching young Kurdish generations that lawlessness and treachery are heroic traits must be held accountable for its actions.

I also urge Seyfo Center to not ignore the massacres of Simel and Soreya and to work on obtaining recognition and proper compensation from the current Iraqi government as part of its agenda. American Mesopotamian Organization is ready and willing to cooperate with Seyfo Center on these matters.

Thank you and God bless our Assyrian nation