(AINA) -- The Assyrian population of Hassakah, Syria is leaving the region because of threats from the Islamic State of Syria and Iraq (ISIS), according to a report by the Adnkronos News Agency (AKI).

Citing an official from the Assyrian Democratic Organization (ADO), AKI reports that the Christian Assyrian residents are abandoning their lands and homes because of fear that what happened in Mosul, Iraq will happen here.

Electric and water service in Hassakah is now severely limited and security is precarious, with kidnappings occurring on a daily basis.

According to the ADO official, ISIS’s attempt to capture the city is a threat to the Assyrians, Arabs, Kurds and Yazidis, who have lived in the city for generations. Hassakah is also a rich cultural and archaeological area, with many Assyrian sites. The images of ISIS destroying cultural sites in Mosul has cast a shadow of fear over the city’s population, particularly Assyrians. ISIS has already destroyed ancient Assyrian monuments and sites in other parts of Syria.

The residents of Hassakah are urging the international community to take action against ISIS, which threatens the city, with its diverse ethnic and religious population and cultural heritage.

Muslims have targeted Assyrians in Syria on several occasions. On February 11, 2013 rebel fighters from the al-Nusra Front took control of al-Thawrah (also known as al-Tabqah) and its strategic dam, the largest of its kind in the country. They also seized control of the three quarters that housed dam workers – many of whom were Christian Assyrians. Whilst they allowed the dam’s original staff to remain in the city in order to continue its operation, management and upkeep, those who were not Sunni Muslim were not afforded the same privilege (AINA 2013-08-04).

„Everything is now in Jabhat al-Nusra’s hands,“ complained one Assyrian refugee, „All the Muslims stayed there, but if any Assyrians want to go back they have to become Muslim or else they will be killed.“

Assyrians reported their property being stolen, their homes being confiscated, and their possessions being sold on the black market in order to buy weapons and ammunition. In many of these cases, those forcefully dispossessed were not even allowed the chance to take with them any of their personal belongings. 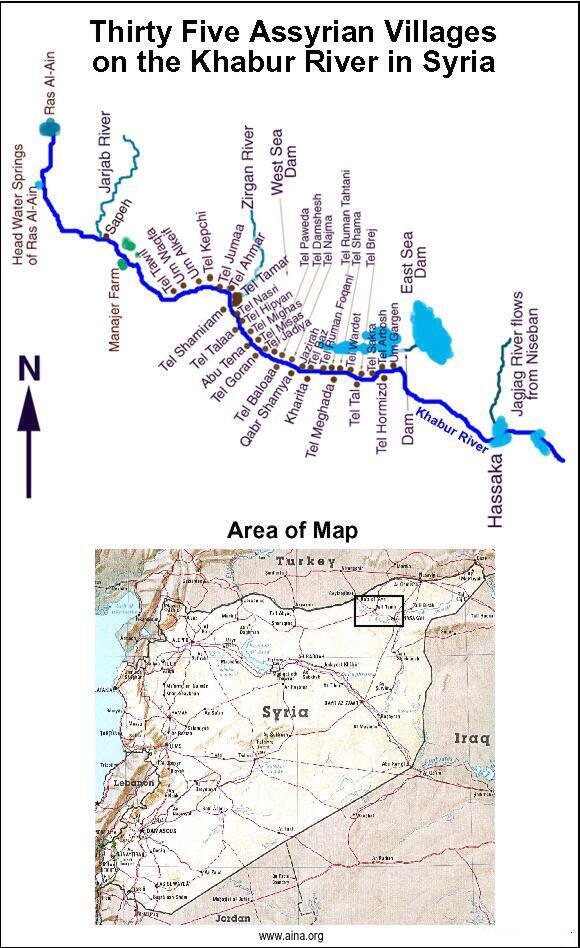 On July 27, 2013 the Assyrian village of Tel Hormizd was attacked. Fifty Arab Muslims on motorcycles entered the village and began a shooting rampage. According to residents, the Muslims fired indiscriminately, wounding two Assyrians. The Assyrians repelled the attack by shooting at the Muslims. It is not known if any of the attackers was injured.

It was the third and largest attack on the village of Tel Hormizd in two months.

On September 21, 2013 a 26 year-old Assyrian man, Ninar Odisho, was murdered in the afternoon in the city of Al-Thawra (al-Tabqah), where he had gone to safeguard his family’s house and property. Mr. Odisho was with two Muslim friends when they were approached by Jihadist rebels, who questioned the three men at gun point. The rebels released his friends upon learning they were Muslim, then beat and bludgeoned Mr. Odisho to death.