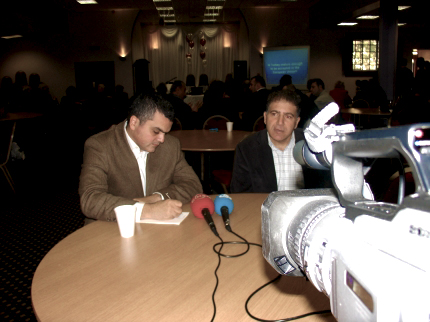 AINA interviews Ara Sarafian, the founder of the Gomidas Institute (London), an organization promoting and disseminating research and scholarship on modern Armenian studies. In 2000 Sarafian edited and published The Treatment of Armenians in the Ottoman Empire, 1915-1916 (known as the Blue Book), an extensive collection of primary-source documents concerning the Armenian, Assyrian and Greek genocide, compiled originally by James Bryce and Arnold Toynbee and presented to Viscount Grey of Fallodon in 1916.

Please tell us about your personal and academic background.

All of my grandparents came from different parts of what is now modern Turkey. So I have a personal involvement in the Turkish-Armenian issue. I am also an archival historian specializing in late Ottoman and modern Armenian history. I often go to Turkey to work in archives and visit various places of interest. Only recently I went to Ayash, outside Ankara, which was one of the locations where Armenian intellectuals from the capital were held prior to their execution. Finally, I am the director of the Gomidas Institute (London), an independent academic organization dedicated to modern Armenian Studies (www.gomidas.org).

Do you consider the 1915 genocide of the Assyrians, Armenians and Greeks to be one genocide?

Yes I do, in the sense that the Armenian Genocide was part of a process of „homogenizing“ a modern Turkish state. In the case of Armenians, Assyrians and Greeks, this was largely achieved through mass murder, but also forced assimilation of the remnants. The destruction of these three Christian communities was one aspect of the „homogenizing“ process, which also included the murder and assimilation of Muslim groups as well–such as Kurds, Arabs, Circassians and Pomaks. However, in the case of Muslim groups, there were less murders and more forced assimilation, as the history of the Turkish Republic shows.

As you are aware, scholars focusing on the Assyrian Genocide are a few. Why do Genocide scholars broadly speak so little about the fate of co-victims of the Ottoman Empire genocide, as opposed to that of the Armenians? How can low-levels of interest in the Assyrian genocide amongst scholars be explained?

There are many reasons. 1. The destruction of Assyrians took place in more isolated parts of the Ottoman Empire, most notably in Hakkirari-Diyarbekir; 2. Elsewhere, Assyrians were often an invisible Christian minority and seen as „Armenians“ by outsiders–such as in the Harput region. They were counted as Armenian victims; 3. Many Armenian historians have not bothered to find out more about Assyrians, or they have not wanted to dilute their „Armenian narrative“ by dwelling on the murder of Assyrians as a separate category; 4. Assyrians and their sympathisers have not been able to represent the Assyrian experience better. This need not be the case today, and it is not. There are more publications on Assyrians and a better understanding of their fate as a distinct ethnicity.

Does the Blue Book compiled by Viscount Bryce and Arnold Toynbee remain the most authoritative reference for primary-source documentation of the genocide, or is new research revealing hitherto unknown information and perspectives?

The Blue Book was a catalyst in informing the world about the Armenian Genocide. I believe that Bryce and Toynbee considered calling it „The Treatment of Armenians and Assyrians in the Ottoman Empire, 1915-16.“ I believe they did not do so because information about Assyrians was weaker–they simply did not have the authoritative information they needed at hand. One can see this in the Toynbee Papers at the UK National Archives. For example, the Americans in Diyarbekir were expelled before the killings began, so that a crucial part of the potential evidence was missing. That was not the case for Trebizond, Harput, Aleppo, or Damascus where there were US Consuls, missionaries and others. However, Assyrians were mentioned in the book, but not in the title of the book.

While the Blue Book was compiled under difficult circumstances and made its essential point, we now have a great deal of information, primary sources, that were not available to the authors of the Blue Book. The history of the Assyrian Genocide should be based on this broader range of records, not only such sources as those in German and Austrian archives, but also the testimonies of Assyrians themselves. There is a lot of potential to make progress, if there is the right organization to promote it.

Asked in 2005 whether Armenia should become the first state to acknowledge the Assyrian genocide, respected scholar Professor Vakhan Dadrian commented, ‚… I can’t give you an answer, because we do not know much about your experience.‘ Referring to the latter comment, Professor Hannibal Travis has suggested that ‚there is a movement within genocide studies to construct an Armenian Genocide that affected Armenians only‘ and that this genocide is ‚discontinuous from the experiences of victims of anti-Christian massacres in historic Assyrian [sic], Pontic Greece, and Thrace.‘ Would you agree with Professor Dadrian’s suggestion that little is known about the Assyrian genocide? How would you, in turn, respond to Professor Travis‘ analysis?

Professor Travis does have a valid point, and we know a great deal more about the Assyrian experience today. I suggest that we focus on making the Assyrian issue better understood today. Professor David Gaunt has a very good book on the Assyrian experience, and I hope more scholars will follow it up. I am always happy to work with Assyrian scholars, and indeed, I do so. But Assyrians should create the means to bring such work to fruition–that means funding for excellent research, publications, dissemination of information, and not least, the creation of a new generation of academics who can continue with such work.

In March 2012, the Armenian Parliament rejected a proposal to consider a bill recognizing the Assyrian and Greek genocides. Assyrians worldwide have asked; ‚if Armenia cannot understand the need for recognition, then who can?‘ Should Armenia have recognized the Assyrian genocide and would you urge the Republic to reassess is previous decision?

Armenia should be the first country to express solidarity with Assyrians and recognize the Assyrian Genocide–both at the state and non-governmental level. I am sure, with a little work, it would be possible to win over people in Armenia to take a stand on the Assyrian issue.

Adopting common projects (i.e. supporting common research and publications), maintaining academic standards, making such knowledge available at a popular level. I should also add that many Turks, Kurds and other Muslims recognize the genocides that were committed in the Ottoman Empire and modern Turkey, and they identify with the victims of these genocides. Of course, this is a welcome development because it holds the prospect of a real resolution based on principles of shared human and ethical values. Recently at the two main commemorations of the „Armenian Genocide“ in Istanbul, Turkish sympathizers did not leave out Assyrians as one of the main groups who were destroyed in 1915. So, once more, there is a foundation to work on–but Assyrians need to work together and project their case in a sensible manner. Having said all this, I have to say that there is progress, and I appreciate the work your Seyfo Center [Assyrian Genocide Research Center] has done over the years. I hope you are getting the support you need to carry on and expand your work.

What is the extent of your work with Assyrians and Assyrian genocide scholars and activists?

I have good relations with Assyrian scholars, and this summer we have two advanced scholars working on Assyrian issues at the Gomidas Institute in London.