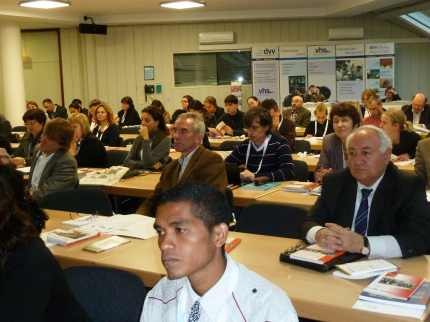 Mr. Noray Betbaba, President of Seyfo Center USA, attended a seminar, in Bonn, Germany on December 12, and 13, 2011, organized by the European Association for the Education of Adults and Academia in cooperation with the Columbia University Institute for the Human Rights (ISHR). There were over 100 renowned intellectuals in attendance, representing various organizations in their own countries. In addition to the organizers of the seminar, some of the organizations present were DVV International and BoCAED. Below is Mr. Betbaba’s speech, delivered on the seminar.

Ladies and Gentlemen, my name is Noray Betbaba. It is my great pleasure and distinct honor, and that of Seyfo Center USA, whom I represent here today, to have been invited to participate in this Seminar and Workshop has been held for two days, and to have been given the opportunity to introduce myself and the‘resilient nation’ of the Assyrians.

Probably some of you haven’t heard or don’t know who Assyrians are, Assyrian are indigenous people of Mesopotamia for over 4000 years BC. The largest civilization at that time, we still speak, read and right our own language fluently.
I am an American citizen, born in Iran. I was compelled to leave my country and immigrate to the US in 1969, along with many others with backgrounds similar to mine. I am an Assyrian, and I hasten to add, from the cradle of Civilization, and very proud of it.

I will be presenting hidden and forgotten genocide of my people that has gone on for centuries. The international community, very correctly, has identified and recognized many acts of Genocide, especially those of the recent past, such as, Ruanda, Yugoslavia, South Ossetia, the Congo, and of course, the Holocaust. The world has yet to recognize the Genocide that has been perpetrated, and continues today, against the Assyrians.

Since 2003 more than half of all Iraqi Christians, vast majority Assyrian, have had to flee to the neighbouring countries to subsist, leaving behind all their great history, dignity, culture, and belongings which they earned and saved form dawn of their civilization. They have fled to these countries with no status; not even being considered as refugees. If they were accepted as refugees the host countries would have had to provide for them in accordance with all the United Nations Conventions. The host governments simply refuse to accept them as refugees. They are compelled to exist on their own, without employment possibilities, no homes to live in, forage for food, no medical care and no access to medicine and no schools for children. The men, women and children are forced into different demeaning type of work to sustain themselves.

Rape, kidnapping for ransom, killing without any mercy, burning of their churches have become the daily life experience of Assyrian living in Middle East. Very recently, the world is witnessing brutality against the Coptic Christians in Egypt who are facing the same future that Assyrians had in World War 1 in Turkey, In Uromieh and Salamas in North West of Iran, the Christians were at the mercy of the ‘Young Turks’, the Kurds and the Arabs. Some Islamic nations do not want anyone other than Muslims living in their countries; they are considered infidels and targeted for death unless they leave.

I wish to present you with a brief summary of the history of the extermination of Assyria and its people. This is the hidden and untold Genocide of a nation and people.
The Assyrian question, to have their homeland was lost and disappeared in 1922 meeting of League of Nations. And in 1930, England ended Assyrian mandate forever to preserve their homeland.

To refresh our collective memories I wish to list the recent history:

A major massacre of Assyrians (and Armenians) in the Ottoman Empire occurred between 1894 and 1897 by Turkish troops and their Kurdish henchmen during the rule of Sultan Abdul. The motives for these massacres were an attempt to reassert Islamism in the Ottoman Empire, resentment at the comparative wealth of the ancient indigenous Christian communities, and a fear that they would attempt to secede from the tottering Ottoman Empire. Assyrians were massacred in Diyarbakir, Hasankeyef, Sivas and other parts of Anatolia, by Sultan Abdul Hamid II. These attacks caused the death of over thousands of Assyrians and the forced „Ottomanization“ of the inhabitants of 245 villages. The Turkish troops looted the remains of the Assyrian settlements and these were later stolen and occupied by Kurds. Unarmed Assyrian women and children were raped, tortured and murdered.[48]

Assyria, throughout the ancient and modern history has managed to nurture and cultivate its culture in spite of waves of political, cultural and economic assault from the Persian Empire, Greek Empire, Roman Empire and even from the brutal conquests Genghis Khan.

Unfortunately today, the future is very grim for this Great Culture and its people. The promise of a better future, or even any future, is fast eroding as the Americans withdraw its military forces out of Iraq.

There are no safeguards left for the survival of Assyria and its people, unless and until the International Community intervene and enforce a just solution to ensure the continued existence of Assyria, its people and their culture.

I wish to call upon this august gathering here today and the International Community to recognize in fairness, the sad history and the plight of the Assyrian nation and its people. It is not too late to live together in harmony and peace. Assyrians wish all communities well.