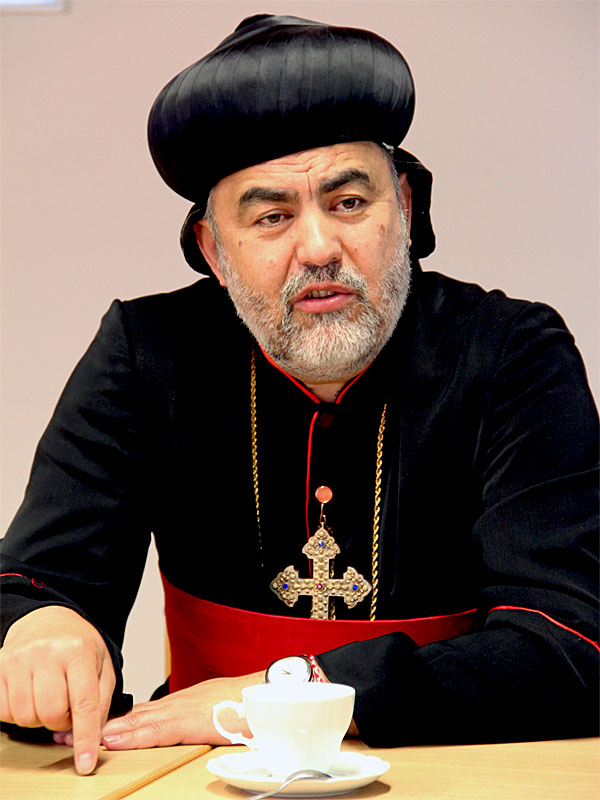 Munich (AINA) -- On Saturday, May 18, Eustatius Matta Roham, the Archbishop of the Syrian Orthodox Church of Antioch for Northern Syria, met activists of the newly formed European Christian Relief Organization (ECRO) in Munich, where he came to visit the White Fathers and other Catholic organizations asking for support for the Syriac (also known as Assyrian and Chaldean) Christian people.

This was the second meeting with the Archbishop in Germany and the situation in Syria was the main topic of discussion. His last trip to Germany took place in May 2012, when he visited the city of Augsburg for a meeting with the local Head of the Catholic Diocese Bishop, Dr. Konrad Zdarsa, and the local Caritas chapter. The Archbishop was accompanied by the Syrian Orthodox Bishop Selwanos of Homs, who reported on the tragic situation of the displaced Christians in his city.

During the recent meeting Archbishop Roham gave an authentic assessment of the recent situation of the Christians in Syria in general and in the Province of Al-Hassake in particular, where he resides. In addition, the talk evolved around the security and humanitarian crisis in the country and options for supporting the suffering Christians in Northern Syria and the refugees in the neighboring countries of Syria.

After the civil war began in Syria, Archbishop Roham took responsibility for the poor parishioner of his Archdiocese and traveled to many places where the flock of the Syrian Orthodox Church was in despair.

Recently, His Holiness Ignatius Zakka I Iwas, Patriarch of Antioch and All the East, sent the Archbishop to Europe in order to assess and manage the problems of the refugees in Greece and in neighboring countries to Syria. He carried a special letter from the Patriarch to Cardinal Schönborn of Vienna to help in bringing the mission to success.

I was deeply touched by your intensive listening to the suffering and risk, which my people and I are facing in Syria during these very difficult days. When hearing Your Eminence offering me a place in your own residency, I felt that I am not left alone and I do have a great brother in Christ helping me in carrying the cross. Your generous offering has reminded me of practicing „Philoxenia,“ like our Father Abraham, and your encouraging words have echoed in me the words of Jesus, „I was a stranger and you invited me in“ (Matthew 25:35). Indeed, I will never forget how much you cared about the well-being of my suffering people and churches. I will always be grateful to your Christian flowing love and faith.

With regards to the current situation of the Assyrians and other Christians in Hassake province, the Archbishop reported the countryside of Northern Syria, which has borders with Iraq and Tur-Abdin in Turkey, „is now mostly controlled by different rebel groups.“

The government seems to have abandoned the rural areas with little towns while concentrating its focus in the two large towns, namely Hassake and Qamishle. People in these two towns have a great fear that fighting might start at any time in their streets. Hassake is about 80 km from Qamishle, which is located on the Turkish border. „In case fighting will start, a very large number of children, girls, women and elderly people will cross the border to Turkey,“ said the Archbishop.

According to the Archbishop Hassake and Qamishle have already welcomed many displaced families from other destroyed areas in Al-Hasske Province, like Dair Al-Zor, Ras Al-Ayn, Thawra, Tabqa, Raqqa, and Shadadi. The Church and a School in Dair Al-Zor were already destroyed in early summer 2012. The faithful left the area and became displaced in many other towns, but most of them have settled in Hassake. In Ras Al-Ayn churches and Christian symbols were destroyed.

In early 2013, some new displaced families arrived from Thawra, Raqqa and Shadadi. Archbishop Roham accepted immediately all their children in Amal Private Schools. „The displaced people of Dair Al-Zor, Ras Al-Ayn, Thawra, Raqqa and Shadadi cannot go back to their home towns, because many of them lost their houses and property,“ the Archbishop added.

Archbishop Roham spoke also about earlier activities in his diocese. In January 2013, the three bishops in Hassake — Yacoub Behnan Hendo of the Syrian Catholic Church, Afrem Nathanael of the Assyrian Church of the East and Eustathius Matta Roham — met to discuss many issues of concern, including kidnappings. A protest march was organized with other notables of the region that criticized the government’s stand of inactivity against kidnappings, with most of the victims being Christians.

With regards of the economic situation in Al-Hassake Province, the Archbishop said „the situation is not better than other areas in Syria. For example, the cooking gas costs 5,000 Syrian Pounds. It used to cost less than 400 Syrian Pounds before the uprising. All kinds of food are expensive. People in Al-Hassake Province suffer long hours of electricity cuts. The region has been cut from international communications for more than two months. The private banks are paralyzed, because the internet is not functioning. The systematic kidnapping is still going on, and there is a daily escape of people across the border to Turkey.“

Inflation in Syria has affected all aspects of life. The economy is going down day after day and the prices of food, fuel and all materials are going up. Unemployment has plunged families into poverty. The middle class became poor, and the poor became more poor. The extremely cold winter of 2013 added more suffering to all.

Archbishop Roham has made many contacts with Church and State leaders in Europe in order to help Assyrians at home and abroad.

On May 7, 2013, Archbishop Roham met Monsignor Huber, Father Josef Moser and Mr. Sebastian Bugl in Munich. He thanked them for their great work with his Archdiocese in the past few years. Also, he asked them and all Catholic organizations in Munich, such as Missio, Misereor and Church in Need, to help the poor suffering Christian families in Syria and abroad.