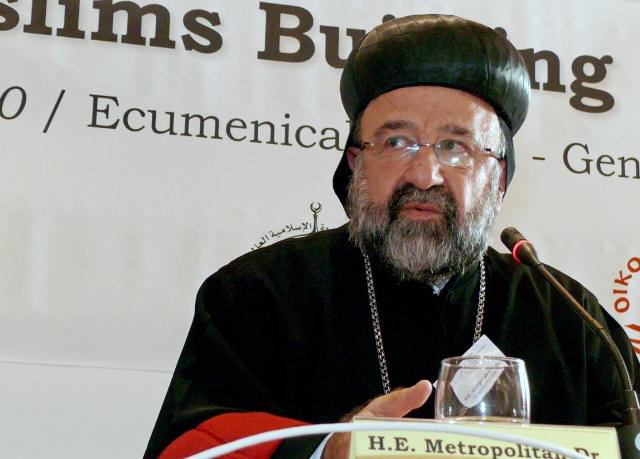 We are the Churches’ leaders of Aleppo meet at the Syrian Orthodox Archdiocese of Aleppo on Friday 24th August 2012, in an extraordinary circumstances, to discuss the current political impasse in Syria and its unprecedented and foretold consequences which are currently unfolding with an ugly magnitude all over Syria and witnessed and suffered by all Syrians and especially Aleppians.

We were told by history that Christian in Syria are home grown, endogenous and ancient component of the Syrian demography. Throughout their long co-existence and patriotic struggle to up hold their priorities to live in dignity in a sovereign, independent and free homeland together with all Syrians. They believe that differences in opinion should consolidate and contribute to the enrichment of the culture of plurality of Syria. They advocated freedom of conscience, freedom of religion and democracy and dreamed to live in love with other which underpinned by social justice, peace democracy. They believed that citizenship is the celling under which such milieu thrives, regardless of the faith, religions and affiliation of the co-citizenee.

As in the past Christens in the Middle East and their churches’ leaders today, in spite of their reduced circumstances and number, will not spare any effort in endeavouring with all peace loving people in the region and worldwide to get Syria out of this vicious circle of violence, and anarchy that undermined the national fabric and eroded its unity and to re-establish truces, law and order, security and advocating for reform, inclusiveness, social justice and peace.

They are currently working to highlight the inhuman conditions and plight endured of their fellow Syrian citizens as a result of this relentless violence, urging humanitarian and benevolent organizations in neighbouring countries and further afield to step in to relief the suffering of the Syrian people. Reminding the world of the Humane and hospitable approach that the Syrian people showed to embrace and elevated the suffering of Iraqi refugees when they reluctantly found themselves in Syria escaping the waves of violence since 2003. Now the Syrian people witnessing the same dilemma and in need in the absent of a proportionate humanitarian aids.

May Lord of Peace give his peace to you in every condition and in everywhere.

May God bless and protect you all.