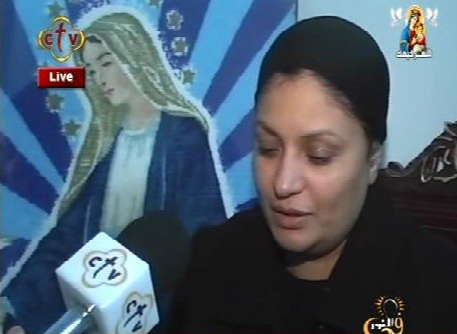 Two weeks after the murder of two Christian brothers by Muslims during the violence that swept the upper Egyptian village of elGhorayzat, the family of the murdered Christians has temporarily come out of hiding to speak of the terror they have been subjected to and decry the impunity enjoyed by the killers, who are walking freely in the village.

On November 28, the two Christian brothers, Kamel Tamer Abraham (55) and Camille Tamer Abraham (50), were killed in revenge for the death of the Muslim Mohamad Abdel-Nazeer, who was injured during an altercation with a village Christian over the building of a fence round the Christian’s house, and who later died in hospital. The Christian man fled from the village with his family.

Mahmoud Abdel-Nazeer, the brother of the dead Muslim, and a mob of Muslims, vowed to avenge his death from all village Copts. They went on a rampage, looting and burning Christian owned homes and businesses, and resulted in the murder of the two brothers and injury to several other Christians not involved in the altercation.

Karam Tamer Abraham, the brother of Kamel and Camille, said that his two murdered brothers were killed in lieu of the life of the Muslim, explaining that the Muslims asked for the lives of his two brothers because they are „the Christian elders of the village.“ He said that the family is in no way related to and does not even know the Christian involved in the death of the Muslim.

The Tamer Abraham family refused any „reconciliation“ with the murderers, and insisted that the rule of law should prevail. „We will get our rights by law, and we will never accept reconciliation, whatever the consequences. We are not in a jungle.“ He said that all this happened to the family because they are Christians.

According to Karam, after the murders, Muslims looted three flats in the family house, and their shop, „while the security forces stood there watching.“

The three men who participated in the killings, according to eyewitnesses, were Mahmoud Abdul-Nazeer, Sabry Mohammad el-Sayed and a third man unknown to them.

„Reconciliation“ sessions are usually arranged by the Egyptian security authorities, after every violence against Christians, and result in Christians being pressured to give up their rights.

Currently the entire Abraham family are on the run, after having received death threats from the son of the dead Muslim, Mohammad Abdul-Nazeer, who demands that all four family children also have to be killed.

Speaking on CTV Coptic Chanel, Mrs. Hiyam Fakhry, wife of Camille Tamer Abraham, describing her ordeal and how she and her children watched her husband had his throat slit by Muslims „with indescribable cruelty“ and for no reason.

Recounting the events of the massacre, Hiyam said that after the Muslims caused violence and destruction in the village, Mahmoud Abdul-Nazeer and nearly all Muslims in the village walked over two miles to their home. They knocked at the door of the family’s multi-story house, and when her husband asked them from their balcony, what they wanted. They answered him „Come down with your brother, we want to slit your throats,“ said Hiyam.

Moments later Mahmoud Abdul-Nazeer and the Muslims broke down the door. They first went into the flat of the 55-year-old childless brother Kamel, and slit his throat with a large knife as he sat on his bed watching TV. They injured his wife Wafaa, took her gold bracelets and 50,000 Egyptian pounds in cash.

According to Hiyam, the Muslim mob the ascended to the second floor, where they gave her husband and 18-year-old son, Mina, blows to their heads, before tying her husband’s hands with a rope and dragging him to a room. „Mahmoud Abdul-Nazeer, slit my husband’s throat,“ said said Hiyam. „He was about to leave him, believing he was dead, when one of the other perpetrators noticed that Camille was still breathing, and told him to go back and finish him completely off and let his blood spill all over the floor. So he slit Camille’s throat another time“.

All the while their 4-year old son Michael was asleep on the bed. He woke up and saw his father lying in his blood and started calling to him and asking him to wake up. „When my child cried, Mahmoud Abdul-Nazeer said ‚get that child and let’s slaughter him over his father‘, but I screamed and begged them until they let him off.“

Mahmoud Abdul-Nazeer has not been arrested, a fortnight after the murder and is present in the village, according to eyewitnesses. Although a warrant was issued for his arrest, the police said he is on the run. This was disputed by Hiyam, who said that he is in the village and he buried his brother the next day and for two days he was bragged in front of his home that he slaughtered two Copts.

She called on the Minister of Interior and other officials to arrest the killer. „He slaughtered innocent people who in their homes and should stand trial.“

The Christian family was told that security forces do not want to arrest him, in order to pressure them to relinquish their rights against the killer and thereby spoil any court case against him. „They do not want to arrest him as this will lead to Muslim violence in the village, as his crime carries the death penalty,“ said Hiyam. „Because they are scared of Muslim violence, the authorities want us to lose the rights of our dead.“